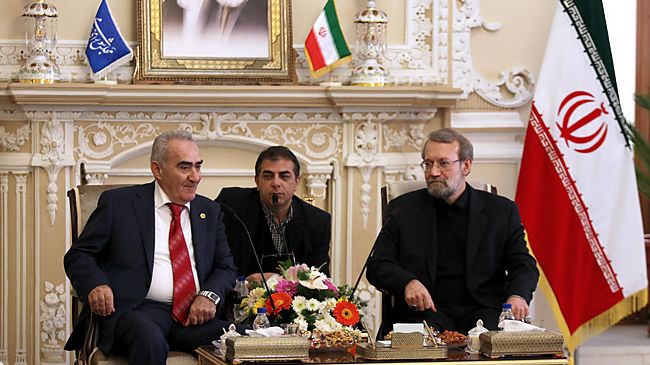 Iran Majlis Speaker Ali Larijani has stressed the importance of bolstering amicable relations with Armenia as a key factor to regional peace and stability.

“The expansion of friendly ties between Iran and Armenia will strengthen bilateral cooperation and play a leading role in establishing peace and stability in the region,” Larijani said in a meeting with the visiting Head of the Armenia-Iran Parliamentary Friendship Group Galust Sahakyan on Monday.

He urged both Tehran and Yerevan to make use of their great capabilities to increase political and economic exchanges and expressed Majlis support for enhanced bilateral cooperation in all fields, particularly in parliamentary arena.

“The Islamic Republic of Iran has always put emphasis on negotiations and political dialog to resolve regional issues and problems,” Larijani stated.

He called for close consultation between Iranian and Armenian officials on regional developments.

The Armenian lawmaker, for his part, said the expansion of cordial parliamentary relations between the two countries would bolster bilateral cooperation in all areas.

The National Assembly of Armenia is ready to improve relations with Iran’s Majlis, Sahakyan added.

He assessed the outcomes of his talks with senior Iranian officials as positive and expressed hope the two sides would take more steps toward further expansion of ties.

On August 5, Iranian President Hassan Rouhani met with his Armenian counterpart Serzh Sargsyan in Tehran and said the Islamic Republic will seek to expand relations with Yerevan.