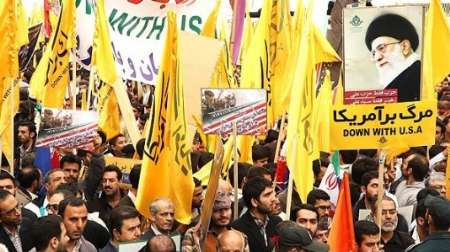 Demonstrators back government’s campaign against sanctions

Tehran, Nov 4, IRNA – Masses of vigorous demonstrators on Monday voiced their support for the government’s campaign against the arbitrary sanctions.

The 13th of Iranian month of Aban (November 4) coincides with the anniversary of the takeover of the US embassy in Tehran by the Iranian students in 1979 for espionage charges in the aftermath of victory of the Islamic Revolution.

The statement highlights resistance and firm determination of Iranian nation in campaign against global arrogance.

Global arrogance led by US government are at odds with the Islamic Revolution, the Islamic awakening movements as well as the Islamic Resistance to Israeli occupation of the Palestinian territories, read the statement.

The revolutionary people are to support the aspirations of the holy Qods and praise the resistance of Palestinian to the occupying Zionist usurper, it said.

The demonstrators also condemned the US spying activities against the European governments, the scandal surfaced last month after phone tapping of German prime minister Angela Merkel, read the statement.

The statement said that Iran’s talks with G5+1 under wise guidelines of the Supreme Leader of the Islamic Revolution is regarded as confidence-building procedures, adding that the US government must apologize to Iran over the arbitrary sanctions and immediately lift them to win Iranians confidence.