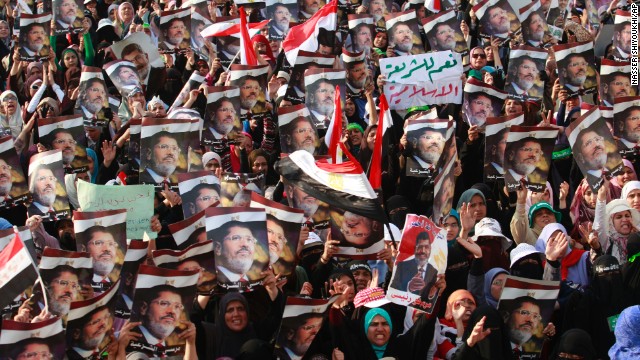 TEHRAN (Tasnim) – Egypt’s former president Mohamed Mursi plans to reject the authority of a court due to try him on Monday, in what could be his first public appearance since being deposed and hidden in a secret location in July.

The trial is expected to increase Egypt’s political tensions, with Mursi supporters planning a series of nationwide protests and police announcing a state of alert. Security fears are so high that on Sunday court officials had not yet confirmed whether the trial would be televised, or even if the ex-president would be allowed to attend in person.

Mursi, who still regards himself as Egypt’s legal president, plans to defend himself because he believes engaging a lawyer would be an indirect acknowledgment of the court’s authority.

“Neither us nor president Mursi acknowledges the legitimacy of this trial,” said Amr Darrag, a cabinet minister during Mursi’s year in office, speaking on behalf of the Muslim Brotherhood’s political wing, the Freedom and Justice party.

Mursi’s trial is likely to spark renewed unrest. A spokesman for the anti-coup alliance – a coalition of Mursi backers from the Brotherhood and its allies – has promised to “make this day an international day of protest. We will defeat this brutal traitorous military coup.” Over a thousand pro-Mursi supporters and dozens of security officials have already died during confrontations at protests since Mursi’s 3 July overthrow. Terrorist attacks by extremists have also risen.

Fears that Mursi’s re-emergence might reinvigorate his supporters have led Egypt’s authorities to keep quiet about the precise arrangements for his trial. While it is likely to take place at a police compound on the eastern outskirts of Cairo, this has not been officially confirmed. An official at the prosecutors’ office told the Guardian it had not yet been decided whether the trial would be televised, orif Mursi would be allowed to attend out of fear for public order.

In news that may exacerbate tensions further, the US secretary of state, John Kerry, arrived in Egypt on Sunday – the first time a US secretary of state has travelled to Egypt on what is known as an unannounced visit for security reasons. A US official said Kerry’s visit was entirely unrelated to Mursi’s trial, but his presence could anger both Mursi supporters and his critics, who each accuse the US of meddling in Egyptian affairs, and of siding with their opponents.

The US has never described Mursi’s overthrow as a coup – but Washington did last month cut the amount of aid it gives to Egypt. The unannounced nature of Kerry’s arrival suggests he is keen to keep a low profile.