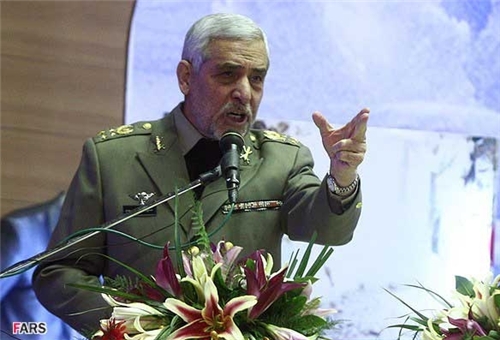 “The honorable Commander-in-Chief (Ayatollah Khamenei) has underscored the (necessity for the) 100% preparedness of the Armed Forces,” Deputy Chief of Staff of the Iranian Armed Forces for Coordination Affairs Brigadier General Hossein Hassani Sa’di announced on Sunday.

“Acquiring 100% of preparedness needs some factors, attainment of a major part of which is among the responsibilities of the Defense Ministry,” he added.

Hassani Sa’di said that the Defense Ministry is responsible for providing support and logistics for the Iranian Armed Forces and has been able to fulfill its duty very well so far.

Iranian commanders have on various occasions stressed their resolve to maintain the excellent level of the preparedness of the country’s armed forces, saying the numerous drills and exercises staged by both the Army and the Islamic Revolution Guards Corps (IRGC) are just part of their plans and programs to this end.

“The Islamic Republic’s Armed Forces are today fully prepared and they will respond to any threat with readiness,” General Pourdastan said in a ceremony in the Southwestern province of Khuzestan in October.

He reiterated that Iran’s Armed Forces have manufactured advanced weapons by utilizing indigenized knowledge and they are powerful in the world.

Iranian military commanders have on several occasions warned the enemies of the grave repercussions of any possible threats against Iran.

In September, Iranian Navy Commander Rear Admiral Habibollah Sayyari termed Iran the most secure country in the region, and said the Navy will give a crushing response to any possible aggressor.

“Iran is the most secure country in the region and we will give a crushing response to any aggression against Iran’s territorial waters,” Sayyari said, addressing a number of Navy personnel in the Northern city of Anzali.

Also in September, Lieutenant Commander of the Islamic Revolution Guards Corps Brigadier General Hossein Salami warned that the IRGC will give a crushing response to any possible enemy threat.

“This response will be a combination of initiatives, planning, wisdom and application of the power that we have accumulated and has been generated for intimidating and deterring the enemies from pursuing ill-will,” Brigadier General Salami said in a TV program.

The commander stressed that the IRGC will give such a firm and swift response to any threat that will make the enemies repent their action.

“For example if we intend to fire 1,000 missiles in war, we have surely stockpiled 10,000 missiles and no one can measure the limits of our power,” he added.

Brigadier General Salami reiterated that the bigger the enemy’s warships, the better Iran’s radars can track them and the more precise and the better the Islamic Republic’s anti-ship ballistic missiles can hit and destroy them.

“The bigger the (enemy’s) warships, the more vulnerable they will be because the IRGC’s Coast-to-Sea and Sea-to-Sea missiles can hunt these big warships more easily,” the IRGC commander said.