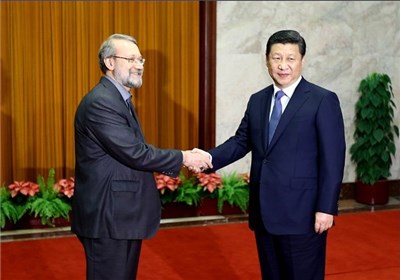 TEHRAN (Tasnim) – A senior Iranian lawmaker said China has agreed to make investment in different projects in the country in lieu of the 22 billion euro of Iran’s blocked assets.

Hossein Sobhani-Nia, member of Iranian Parliament’s Presiding Board, told Tasnim on Saturday that the country’s parliamentary delegation, during a recent visit to China, discussed a broad range of topics with Chinese officials, including Iran’s blocked assets — mainly from oil export revenues.

Iran’s Parliament Speaker Ali Larijani traveled to Beijing on Tuesday on an official visit to discuss the promotion of parliamentary, political, economic and cultural ties between Iran and China during his meetings with high-ranking Chinese authorities.

Shortly afterwards, the government spokesman, Mohammad Baqer Nobakht, announced that 22 billion euro of Iran’s assets have been blocked in China.

Sobhani-Nia further added that Chinese officials have agreed to finance some $20 billion in Iran in lieu of the blocked assets in China which belong to the Islamic Republic.

According to China Customs, this country which recently overtook the US as the world’s biggest oil importer, imported 16.01 million tons of Iranian oil during the first nine months of the current year. The amount equals 428,160 barrels per day.

Beijing makes Iranian oil payments through its national currency, the yuan, and deposits it in an internal bank account which is accessible only for purchasing permitted commodities inside China and exporting them to Iran.

China and Iran enjoy an extensive economic relationship despite UN Security Council sanctions. Currently, Iran is the third largest supplier of crude oil to China, providing it with some 12 percent of its total annual consumption, and the volume of bilateral trade is well over $40 billion dollars.