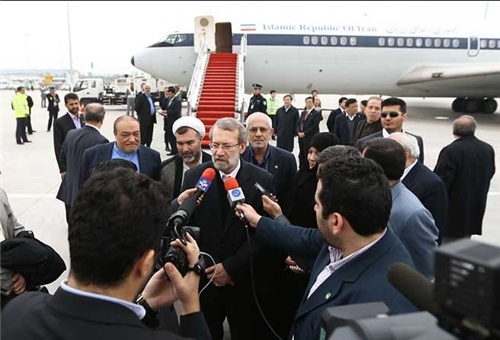 The Iranian top parliamentarian noted that Tehran and Beijing are resolved to promote their bilateral relations to a new level.

The Iranian speaker also called for serious steps to expand the two countries’ tourism ties by facilitating visa issuance. He called on Beijing to help with the process.

Larijani also pointed to the high demand in the Chinese market for Iranian products and underlined the need for using such potential.

Larijani met with Chinese President Xi Jinping on Wednesday, during which he underlined the need for the further expansion of all-out ties between the two friendly nations.

During the meeting, the Iranian top parliamentarian conveyed greetings of Supreme Leader of the Islamic Revolution Ayatollah Seyed Ali Khamenei to the Chinese president.

Larijani noted that the Supreme Leader has always advised officials to consider sustainable and all-out relations with China.

The Chinese President, for his part, welcomed the Iranian delegation to his country, and termed his recent meeting with President Hassan Rouhani in Bishkek as very fruitful.

He said the two countries have reached very good agreements in various scopes of cooperation.