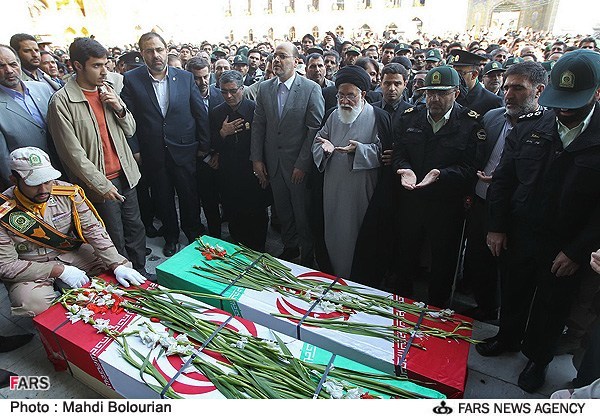 TEHRAN (FNA)- The Iranian Interior and Foreign Ministries are discussing to send a delegation to Pakistan to see Islamabad officials on the recent terrorist attack against the country’s border guards, a deputy foreign minister said.

After a meeting with the Parliament’s National Security and Foreign Policy Commission, Iranian Deputy Foreign Minister for Consular, Parliamentary and Expatriates’ Affairs Hassan Qashqavi said that there is a possibility for dispatching a delegation to Pakistan over the recent terrorist attacks against border guards in Sistan and Baluchestan province.

He also said that the Interior Ministry and the Foreign Ministry are to follow up the case.

14 Iranian border guards were killed and 6 more were injured during the terrorist attack in Saravan border region in Southeastern Iran in the early hours of Saturday morning. The terrorists who have reportedly been members of the outlawed Jeish Al-Adl radical Sunni Wahhabi movement affiliated to the terrorist Jundollah group fled into Pakistan after the operation in Iran’s Southeastern Sistan and Balouchestan province.

In one of its last operations in Iran, the Pakistani-based Jundollah terrorist group claimed responsibility for December 15, 2010 attack at the Imam Hussein Mosque in Iran’s Southeastern port city of Chabahar in Sistan and Balouchestan Province where people were commemorating the martyrdom of Imam Hussein (PBUH), the third Shiite Imam.