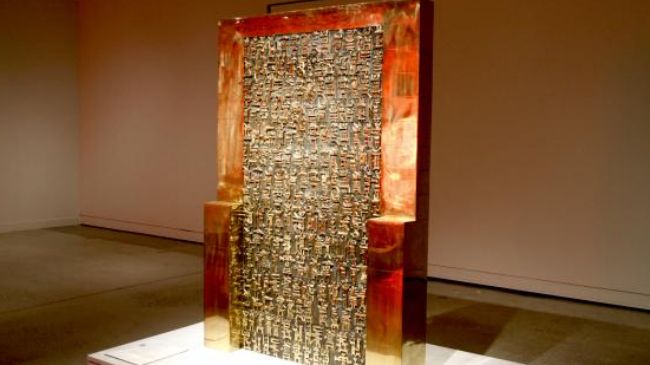 Tanavoli’s “The Wall (Oh Persepolis I)” was also offered in the 2008 Christie’s which hit record high when it was sold for $2.8 million.

Calligraphic-painting by Mohammad Ehsaie was hammered at $400,000, and the painting by Kami Yousefi sold at $100,000.

Some 40 artworks created by 36 Iranian artists were offered at different sections of the auction including part I, Part II and Part III held at Jumeirah Emirates Towers Hotel in Dubai.

Leading modern and contemporary Middle Eastern and Turkish artists presented their works at this seasonal auction.

Acclaimed Iranian artist Farhad Moshiri’s seminal piece “The Secret Garden” fetched an above-estimated price at the previous edition of Christie’s auction in Dubai that was held in April.

Christie’s auction of Modern and Contemporary Arab, Iranian and Turkish Art took place on Tuesday and Wednesday, October 29 and 30.

Christie’s Part III Middle Eastern Art sale which is only for online bidding kicked off on October 24 and will run until November11, 2013.