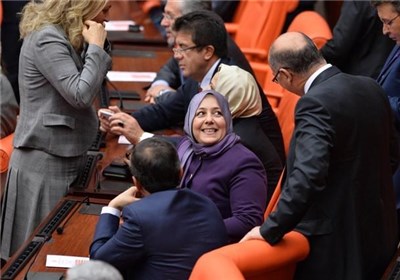 Deputy Parliament Speaker Meral Akşener, who was chairing the session, called for a recess after the main opposition Republican People’s Party (CHP) called for a debate on the procedure, Turkey’s Hurriet Daily News reported.

The response from the CHP was being followed closely, as the party has labeled the move “insincere” and announced that it “will not fall into AKP’s trap” by overreacting.

“All the AKP is intending to do with this headscarf issue is play the role of the ‘mistreated.’ We will not fall into this trap. We will not let the AKP play the role of the mistreated while they are the haughty party. We will take Erdogan’s trump card from his hands,” the CHP’s deputy parliamentary group chair Muharrem Ince told reporters, following his party’s closed-door parliamentary group meeting Oct. 30.

President Abdullah Gul, for his part, said there was no legal obstacle against the attendance of veiled lawmakers at Parliament, emphasizing that the CHP had also made contributions to pave the way for the recent legislative change.

“This issue was once seen as taboo. We should see that they (the CHP0 also made a constructive contribution,” Gul said during the Republic Day reception he hosted at the Cankaya Presidential Palace on Oct. 29.