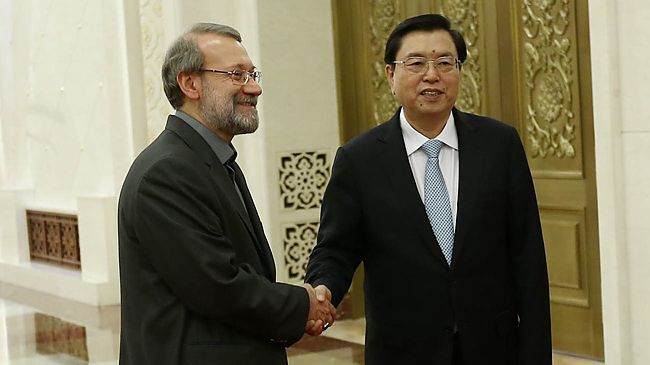 Tehran-Beijing relations are in an important phase, said Zhang, pledging to expand bilateral legislative ties, which constitute an important part of the relationship between the two nations.

The Chinese legislator further pointed to a the meeting between Iranian President Hassan Rouhani and his Chinese counterpart Xi Jinping in Bishkek in September, emphasizing that Beijing is ready to cooperate with Tehran in an effort to implement the consensus reached by the two presidents.

The Iranian Majlis Speaker, for his part, described parliamentary relations between Iran and China as dynamic, expressing Tehran’s preparation to promote bilateral relations in various fields.

Larijani further touched up on the Islamic Republic’s nuclear negotiations with the six major world powers — the US, Britain, France, China, and Russia plus Germany – and said, “ We have a constructive behavior in talks with the P5+1 group and we hope China will help to resolve problems like before.”

Tehran and the six powers held two days of discussions over Iran’s nuclear energy program behind closed doors in Geneva, Switzerland, on October 15-16. The two sides agreed to meet again in Geneva on November 7-8 after the expert-level meeting, which is underway in Vienna.