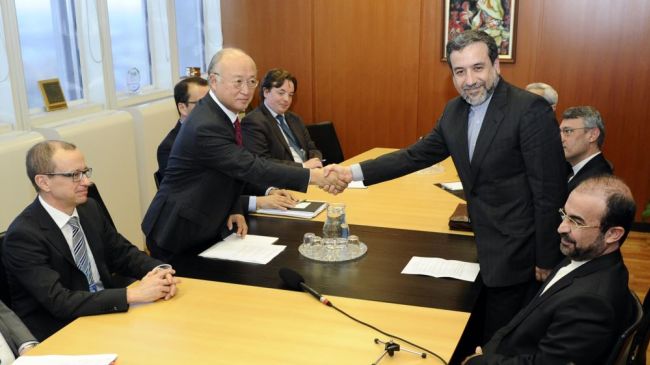 “We hope that we would reach good results based on proposals we have offered to the IAEA (International Atomic Energy Agency) regarding how to continue the talks, and we expect to witness the first signs of this new interaction at the end of the talks,” Afkham told reporters on Tuesday.

Iran and IAEA held two days of negotiations at two different levels in the Austrian capital, Vienna, on October 28-29.

The Iranian official said that in his talks with Amano, he has given a detailed explanation about “Iran’s new approach.”

Afkham said, “The Islamic Republic of Iran has always emphasized cooperation with the IAEA and has made utmost efforts for transparency, removal of ambiguities and response to [IAEA’s] questions.”

On Tuesday, Iran and the IAEA described their two-day negotiations in Vienna as “very productive.”

The two sides agreed to hold the next round of talks in the Iranian capital, Tehran, on November 11.

The latest round of talks between Iran and the IAEA – the first under the administration of Iranian President Hassan Rouhani – was held on September 27.