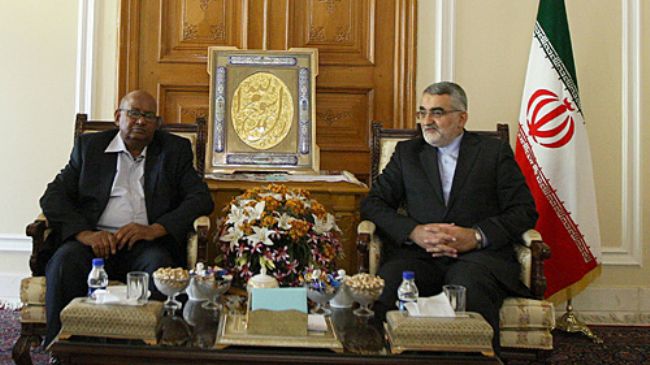 A senior Iranian lawmaker expresses regret over the situation in the Muslim world and the spread of terrorism, saying terrorist groups are pursuing the interests of the United States and Britain.

“The terrorist groups including al-Qaeda and the al-Nusra Front in Syria are serving the interests and policies of the US and Britain through the brutal killing of this country’s Muslim people,” Chairman of the Majlis National Security and Foreign Policy Committee Alaeddin Boroujerdi said in a Tuesday meeting with a visiting delegation of the Federal Parliament of Somalia, led by Cabdalle Boss Axmed.

The United Nations says more than 100,000 people have been killed and millions displaced due to the violence.

Muslim countries have been instrumental in international interactions thanks to their unity and solidarity, Boroujerdi added.

He noted that Iran’s Majlis supports amicable ties with Muslim countries in Africa.

“Expansion of friendly relations in political, economic and cultural fields with Muslim countries is among the basic policies of the Islamic Republic of Iran,” the top Iranian legislator added.

Axmed, for his part, said the Federal Parliament of Somalia attaches importance to bolstering political, economic and parliamentary cooperation with Iran.