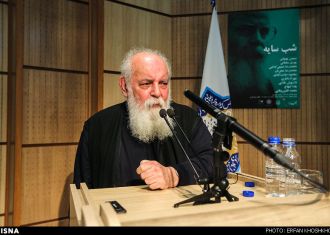 TEHRAN, Oct. 29 (MNA) – Celebrated Persian poet Hushang Ebtehaj, known by the pseudonym of H. E. Sayeh, was commemorated by the Persian literary magazine Bokhara during a session at the Persian Language Center in Tehran on Sunday.

The commemoration was one of the regular sessions the magazine holds to review works of Iranian and international literati and cultural figures.

A number of literati including Simin Behbahani, Mohammadreza Shafiei Kadkani, Dariush Talaii, Najaf Daryabandari, singer Shahram Nazeri and artist Aidin Aghdashlu were among the participants at the ceremony which was held in collaboration with the Mahmud Afshar Foundation.

Speaking at the ceremony, Bokhara Managing Director Ali Dehbashi said that Ebtehaj’s work quickly turned into one of the peaks of sonnets in contemporary poetry, as (poet) Shahriar has said of him, “Sayeh’s poetry is all the sonnets after me.”

He added that Ebtehaj had experienced both composing sonnet and traditional poetry, “he also composed blank verse and has been successful, the number of publications of his books over the years proves the words.”

Poet Behbahani expressed her happiness in attending the ceremony despite her illness and called Sayeh a great honor for Iran, “he is our honor with his poetry and his works. He was praised by many when he was the head of the music department of Iran’s Radio”.

Ebtehaj was the head of the music department of Iran’s Radio from 1972 to 1977, which has been called a golden time of radio by many.

Nazeri recalled his memoirs with Ebtehaj and the years he used to meet him in his house which he called a university of literature, music and wisdom. “In those years when I met the master in his house, I used to see many poets and literary figures such as Ehsan Tabari, Siavash Kasraii and Mohammad Qazi. It was a shining time of my life. He used to work with patience, and I believe he had a major role in the formation of a social attitude in Iran’s music.”

Ebtehaj was the last who delivered a brief speech, and said, “It is not a hard task to get to know me. To get to know simple people is also a simple task. Whatever I have uttered and composed, I have said out of my beliefs and have said with honesty.”

The ceremony was brought to an end with a showing of memorable works about Ebtehaj’s poetry. A selection of his photos depicting different years of his life were also screened for the participants.

Born in 1928 in Rasht, Ebtehaj is an eminent Iranian poet of the 20th century, whose life and work spans many of Iran’s political, cultural and literary upheavals.

His first book of poetry, with an introduction by eminent poet Mehdi Hamidi Shirazi, was published when he was 19 years old.

Unlike many other literary figures of the time who became deeply involved in politics and left-leaning activities, Sayeh stayed true to his social and political consciousness but refrained from deeper involvements.

Sayeh reveals an easy mastery of traditional forms — in particular the lyrical ode — which he uses to celebrate both the sacred and the secular moments of life.Many of his poems are used by the musicians for memorable pieces sung by celebrated vocalists like Mohammadreza Shajarian, Shahram Nazeri and Hossein Qavami.“The First Songs”, “Mirage”, “Bleak Travails I”, “Nocturnal”, “Memorial to the Blood of the Cypress”, “Mirror in Mirror” and “Dispirited” are among his credits.By Mehr News Agency