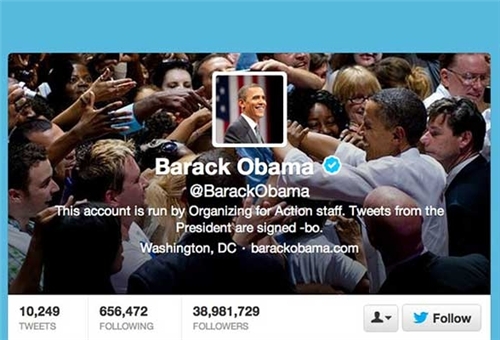 TEHRAN (FNA)- Hackers of the Syrian Electronic Army claimed Monday they had taken control of US President Barack Obama’s Twitter and Facebook accounts.

The group, which backs Syria’s government and which has previously hacked accounts of The New York Times, Agence France-Presse and other media organizations, published screen shots which it said backed its claims, Voice of Russia reported.

Both accounts appeared to be functioning normally some time after the claim.

The Syrian group also indicated it took over a Gmail account from Obama’s campaign and a page from that website.

“We accessed many Obama campaign emails accounts to assess his terrorism capabilities. They are quite high,” the group tweeted.

An official at the political offshoot of the Obama campaign called “Organizing For Action” acknowledged that the link shortener was hacked but that the Twitter handle itself was not compromised.

The SEA has made itself known in recent months, hacking the Twitter account of The Associated Press to put out a false tweet saying Obama had been hurt in two explosions at the White House.

SEA has also targeted the Twitter account of the AFP photo service, as well as social media at the BBC, al-Jazeera and the Financial Times and Guardian newspapers.

The group alleges bias in the coverage of most media outlets over the unrest in Syria.