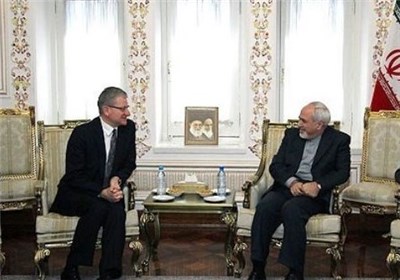 TEHRAN (Tasnim) – Iranian Foreign Minister Mohammad Javad Zarif and Poland’s Undersecretary of State Boguslaw Winid in a meeting in Tehran explored avenues for the further expansion of relations between Tehran and Warsaw.

During the meeting on Monday, the Iranian foreign minister lauded the age-old relations between Iran and Poland, and said that the Islamic Republic welcomes further expansion of comprehensive cooperation between Tehran and Warsaw.

The Polish undersecretary of state, too, referred to five centuries of ties between the two nations, and underlined that an upcoming visit by Polish Foreign Minister Radoslaw Sikorski to Tehran will mark the opening of a new chapter in Iran-Poland historical ties.

Boguslaw Winid also expressed the hope that nuclear negotiations between Tehran and the five permanent members of the UN Security Council plus Germany would yield positive results.

The two sides also exchanged views on the latest developments in Syria and Afghanistan and discussed the threats posed by extremism and terrorism against the world nations and stressed the need for the international community to find an effective solution to the new malicious phenomenon.