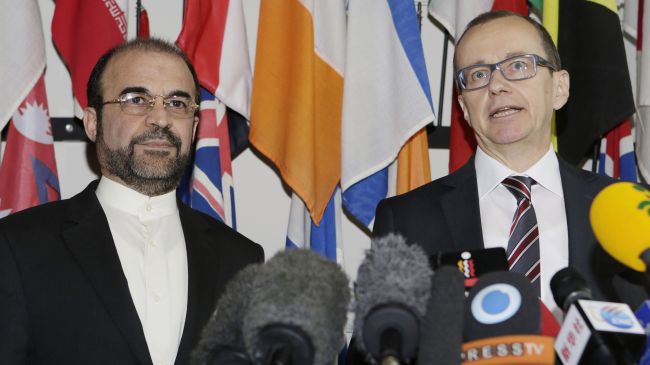 Iran and the International Atomic Energy Agency (IAEA) have described their two-day negotiations in Austrian capital, Vienna, as “very productive,” saying they will meet again on November 11.

The next round of talks between Iran and the IAEA is planned to be held in Tehran, IRNA quoted a source close to the Iranian nuclear negotiating team as saying in Vienna on Tuesday.

“During the second round of their talks today (Tuesday), the Islamic Republic of Iran and the International Atomic Energy Agency reached a new accord which will replace the previous frameworks,” the source said.

The source added that the new agreement was the most important achievement of the two-day talks in Vienna.

Iran and IAEA held two days of negotiations at two different levels in Vienna on October 28-29.

Araqchi said on Monday that in his meeting with Amano, the Iranian side has expressed its willingness to improve cooperation with the Agency.

Iran Ambassador to the IAEA Reza Najafi headed the Iranian delegation in the expert-level talks, and the IAEA team was headed by the Agency’s Deputy Director General Tero Tapio Varjoranta.

The latest round of talks between Iran and the IAEA – the first under the administration of Iranian President Hassan Rouhani – was held on September 27.

Iran has categorically rejected the allegation, stressing that as a committed member of the IAEA and a signatory to the Non-Proliferation Treaty (NPT), it is entitled to develop nuclear technology for peaceful purposes.

In addition, the IAEA has conducted numerous inspections of Iran’s nuclear facilities, but has never found any evidence showing that the Iranian nuclear program has been diverted toward non-civilian objectives.