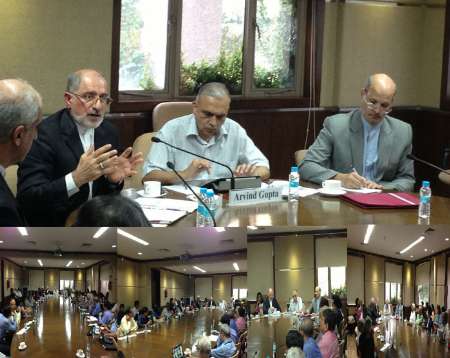 New Delhi, Oct 29, IRNA – Iran’s ambassador to India said if the West thinks that Iran was forced to negotiate because of sanctions or military threats, it is making a big strategic and historical mistake.

Gholamreza Ansari made the remarks in a gathering in India Defensive Research and Analysis Institute here on Monday afternoon.

He added that if westerners come to nuclear talks with this point of view, there would be no progress in the talks, and we should start from scratch.

Concerning Syria and Afghanistan, Ansari said that both countries experienced the same crisis made by terrorists and extremists, while Iran had already warned about interference in Syrian affairs, but a number of governments did not pay attention to Iran’s warning.

Now, these governments have realized that by toppling the regime in Syria, not the democratic forces but terrorists will be the winner.

The ambassador continued that nowadays terrorism is threatening the whole region and Iran is ready to help any country which believes in security in Afghanistan and Syria.

Ansari said that West and its Arab allies, after paying an expensive price, found out that regional crises can not be solved without Iran’s participation and that Iran and West need each other and West cannot be winner in fighting against terrorism without Iran.

Concerning Bahrain, Ansari said that Iran does not interfere in Bahrain affairs and considers the problem as a domestic issue.

He added that the solution for Bahrain problem is holding a free and fair election.