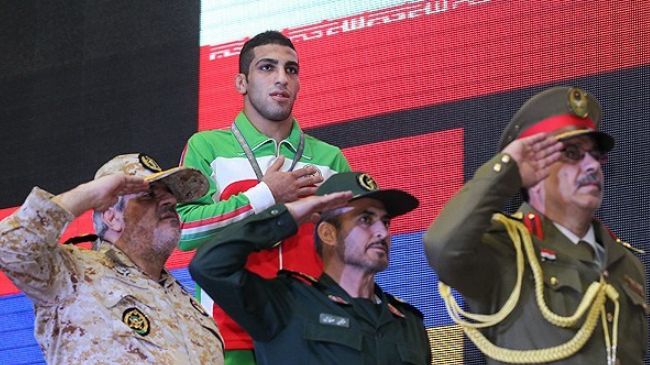 The national Iranian freestyle wrestling team has won five medals at the at the 28th edition of the World Military Wrestling Championship Tournament in Iran.

On Sunday, Iranian wrestlers Farshad Safarzadeh, Saeed Dadashpour and Esmail Nejatian exhibited impressive performances at the second hall of the Wrestling House in Tehran, and collected the gold medal in the men’s 60-kilogram, 74-kilogram and 84-kilogram weight categories.

The Iranian team amassed 68 points and was named the top-ranked squad. Kazakhs landed in second place with 48 points, and third-place Chinese bagged 42 points.

Iranian military wrestlers ended the first day of freestyle wrestling competitions on Saturday with two gold medals and a silver.

Mohammad Naderi defeated Yang Jung-sung from North Korea in the final bout of the 66-kilogram weight category, and collected the gold medal.

The 28th edition of the World Military Wrestling Championship Tournament opened in the Iranian capital on October 22 and wraps up on October 28.

The event brought together more than 300 athletes from 17 countries.