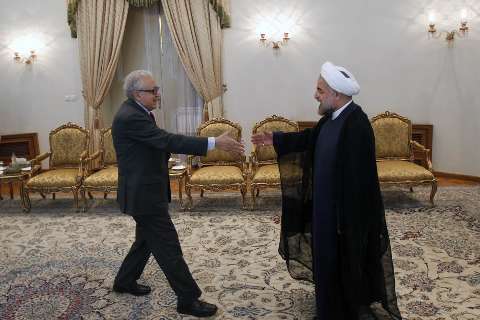 Tehran, Oct 27, IRNA – President Hassan Rouhani said on Sunday the Islamic Republic of Iran would spare no efforts to restore peace to Syria.

President Rouhani made the remarks in a meeting here with visiting UN Special Representative for Syria, Lakhdar Brahimi.

ˈIt is promising that other countries have reached the conclusion that the Syria crisis has no millitary solution and must be resolved through political means,ˈ said the President.

He added that settlement of the Syrian crisis through political means was the best way for a quick halt to the ongoing violence in the Arab country.

The President also voiced Tehranˈs complete readiness to play a positive role for restoring peace to Syria through any way including the Geneva 2 conference or any other movements.

Iran is ready to host any meeting to find a solution to the crisis in Syria with the participation of its neighboring countries, President Rouhani said.

He added that Tehran has even announced its readiness to Ankara, Turkey, to help resolve the Syrian crisis.

Brahimi, for his part, said he was on a series of visits to a number of the regional countries prior to the Geneva-2 conference on Syria.

The conference aimed at preparing the ground for holding talks between the clashing parties in Syria and ending the violence in that Arab country, Brahimi said.

Brahimi arrived in Tehran on Saturday to discuss the ongoing crisis in Syria with the Iranian officials.

His visit to Tehran aimed at preparing the ground for the Geneva 2 peace conference on Syria, scheduled to be held in November.

Brahimi is currently on a Middle East tour to seek a solution to the ongoing crisis in Syria.