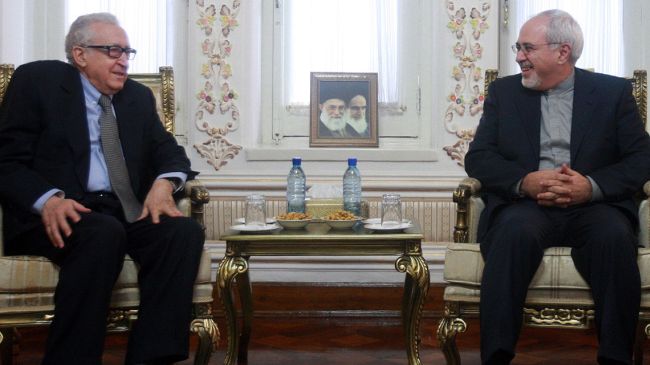 In line with its policy of providing and maintaining stability and security in the region, Iran wants to help the settlement of the Syria crisis “through a political solution,” Zarif said in a meeting with UN-Arab League Special Envoy to Syria Lakhdar Brahimi on Saturday.

“Iran supports any initiative and solution aimed at helping the resolution of Syria crisis based on taking into account the role of the people of the country, and it will employ what it has in power to advance this process,” he added.

He pointed to the serious repercussions of continued insecurity and instability for all regional countries, saying terrorist attacks jeopardize the security of the entire region.

Iran believes that stability and security in the region will be achieved through constructive cooperation and interaction among regional countries, the top Iranian official said.

Brahimi, for his part, highlighted Iran’s role and status in resolving issues in the Middle East, particularly the Syrian turmoil.

Pointing to ongoing efforts to hold the Geneva II conference on Syria in due time, he said that all influential countries and parties, including Iran, should participate in the political process of resolving the crisis in the Arab country.

Only a political solution supported by all regional influential parties can settle the crisis, he stressed.

Brahimi arrived in the Iranian capital, Tehran, on Saturday to discuss the ongoing crisis in Syria with Iranian officials.

The UN-Arab League envoy is currently on a Middle East tour to gather support for the Geneva II meeting, which is scheduled to be held in November.

Syria has been gripped by deadly unrest since 2011. More than 100,000 people have been killed and millions displaced due to the turmoil.