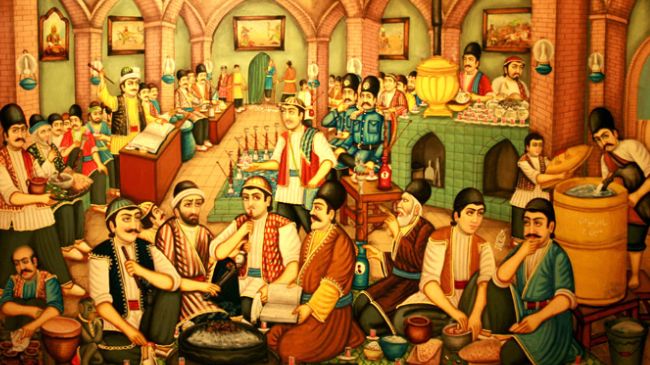 An Iranian art scholar has suggested to the country’s officials to register teahouse painting on the UNESCO’s List of the Intangible Cultural Heritage of Humanity.

Iran’s art expert Majid Hosseini-Raad asked officials to pay attention to the issue before other countries possess this Persian genre of painting.

Teahouse paintings usually feature what goes on in the heart of the artist rather than relying on classical techniques and there is no limitation of subject in this style.

Teahouse painters listened to the discussions and tales, using them as subjects for the paintings they drew on the walls, tiles, stones and canvases.

They drew motifs entirely based on their imagination. The themes of such paintings are epic stories, traditions and religion.

The real identity of this traditional Iranian art may be threatened by the countries such as Egypt, Iraq, or even Pakistan,” Hosseini-Raad said during the closing ceremony of an art show at the Imam Ali Religious Arts Museum.

“They may make claims on this national art form, because this art has been transferred into those countries from Iran,” he added.

Hosseini Raad stressed on the issue after Azerbaijan announced its claim on the ancient Persian game titled ‘Chowgan’.

Cultural and historical documents prove that Chowgan has been played in Iran since ancient times.

Chowgan, which is known as Polo in western countries, is originated in Iran more than two millennia ago. The game had been named in the Iranian epic poet Ferdowsi’s masterpiece The Shahnameh (The Book of Kings) about 1000 years ago.

Polo was carried to India by the Mongol rulers, thereafter, the British army officers assigned to India took the game to England and then it was propagated throughout the world.

Azerbaijan did also similar movement in its last year’s submission to UNESCO’s list when the country registered traditional Persian musical instrument ‘Tar’ in its own name.

Many Iranian heritages have been inscribed on UNESCO’s World Heritage list so far.

Iranian ritual of carpet washing (Qalishuyi) held in Mashhad Ardehal was registered on the UNESCO’s list during last year’s session of the organization’s annual committee meeting.

Iran’s Friday Mosque (Masjid-e Jameh), located in the historical city of Isfahan, and Gonbad-e Qabus tower, situated in the city with the same name, were also inscribed on UNESCO’s World Heritage list.

Iran has offered ‘Traditional Persian Medicine’ to be registered on this year’s UNESCO’s representative list of the Intangible Cultural Heritage of Humanities.

The file is to be reviewed at the eighth session of the committee’s meeting which will take place in the Azerbaijan’s capital city, Baku, from December 2 to 8, 2013.