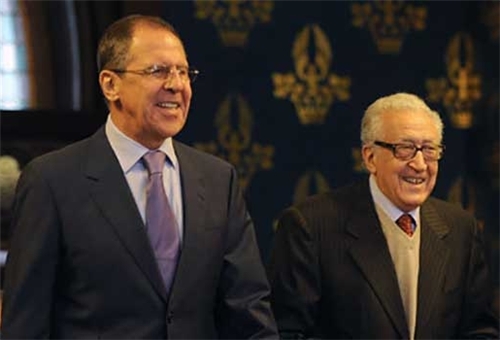 TEHRAN (FNA)- Russia’s Foreign Minister Sergei Lavrov and UN-Arab League Joint Special Envoy for Syria Lakhdar Brahimi agreed to continue their joint work on the convocation of the Geneva-2 conference, including their efforts on that score at the consultations in Geneva on November 5th in the Russia–US–UN format.

Lakhdar Brahimi briefed the Russian Foreign Minister on his tour of a number of Middle East countries and his contacts involving the preparations for the international Geneva-2 conference on Syria.

Lavrov stressed the necessity of continued efforts of the Joint UN – Arab League Special Envoy for Syria in the formation of a single representative delegation of the Syrian opposition for talks with the government as well as the necessity to ensure the participation of the key regional states in this conference.