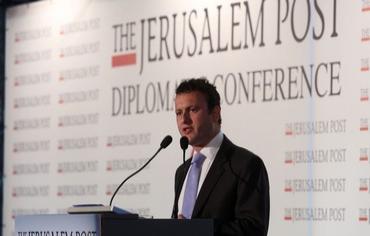 UK ambassador Gould: ‘Israel is not alone on Iran’

The United Kingdom won’t allow Iran to produce nuclear weapons nor will it compromise on Israel’s security, its ambassador to Israel Matthew Gould promised in a speech he delivered Thursday at The Jerusalem Post Diplomatic Conference.

“Iran is not just Israel’s problem. Iran’s nuclear ambitions and its support for terrorism present a threat to the region and the world,” he said. “Israel does not face the threat from Iran alone.”

The UK is one of six parties, along with Germany, France, Russia, China and the US, in the midst of negotiating with Iran in hopes of disarming its nuclear weapons program through diplomacy.

Israel in the past weeks has led what seemed at times to be a solitary campaign to insist that these six parties must not ease the financial pressure on Iran until it has dismantled its nuclear weapons program and removed enriched uranium from its country.

“It would be neither right nor wise for Israel to chart its way forward on the issue as if it were alone,” Gould said.

The British ambassador pointed out that in spite of Iran’s progress toward the production of a nuclear weapon, time was not necessarily playing favorably for the Iranians because of the economic pressure from the sanctions.

It was important, he said, to do the utmost to explore the possibility of a diplomatic solution while that pressure remains.

He sought to reassure Israel that Great Britain’s desire to use this window of opportunity to seek a diplomatic solution did not mean that it would settle for a “bad deal.”

He said he understood Israel’s fear that the British parliament’s decision not to support military actions in Syria meant that it would also hold back on Iran. But he said that “the British Parliament’s vote on Syria should not be taken as evidence of a lack of resolve on Iran.”

There is a difference between the danger of Syrian chemical weapons and a nuclear Iran that would start a regional nuclear arms race, he said.

“So I want to be absolutely clear: while the centrifuges are spinning, while inspectors are denied full and free access to nuclear sites, while there is any sense that Iran is prevaricating or reneging on any commitments, we will continue to maintain strong sanctions,” Gould said.

“As we take part in these negotiations we will keep clear in our minds one thing above all others – the infrastructure of Iran’s nuclear program, how many centrifuges they have, and how long it would take them to develop a bomb,” Gould said.