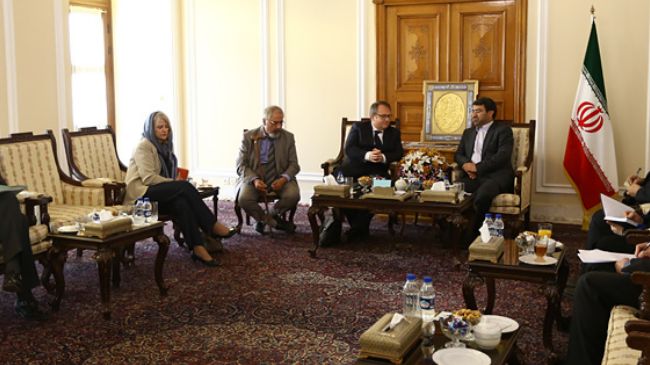 A senior Iranian parliamentarian has reiterated that Tehran will not renounce its entitlement to develop nuclear technology for peaceful purposes.

The remark was made by Chairman of the Legal and Judicial Committee of Iran’s Majlis Allahyar Malekshahi in a meeting with French senators Joelle Garriaud-Maylam and Jean-Yves Leconte in Tehran on Wednesday.

The Iranian lawmaker touched upon the age-old friendship between Tehran and Paris, expressing hope that mutual parliamentary relations will further grow in the future.

He underlined the significance of parliamentary exchanges between the two countries, saying both legislatures can share experience with each other in lawmaking.

The French Senators also held a separate meeting with Head of the Iran-France Parliamentary Friendship Group Hassan Kamran, during which the Iranian MP voiced support for any measure that aimed at furthering reciprocal ties between the two countries.

He said that the parliamentary friendship groups of the two countries can facilitate the promotion of political and cultural ties between Tehran and Paris.

Kamran also said that constant consultations between the high-ranking officials of both sides would contribute to regional stability and security.

Garriaud-Maylam, for her part, said that the new atmosphere created following Iran’s presidential election in June has raised the prospect for closer ties between the Islamic Republic and France.

She also expressed hope the West’s dispute with Iran over its nuclear energy program will be settled, which, she said, will pave the way for the expansion of Iran-France ties.