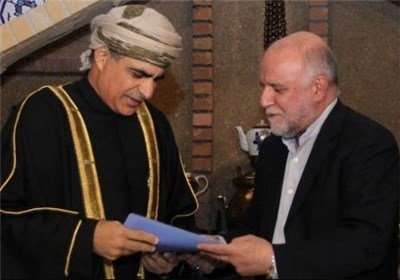 TEHRAN (Tasnim) – Oman’s oil and gas minister said on Wednesday Iran and Oman are surveying the best path for a submarine gas pipe to transfer Iran’s gas to the sultanate.

“We are currently doing a survey to find out the optimum distance and characteristics of the seabed and all that goes with it,” Mohammed bin Hamed al-Rumhy told his country’s Daily Oman Observer, adding it needs at least four years for Iran’s gas to reach Oman through the seabed pipeline.

Commenting on the outlook for Iranian gas imports,al-Rumhy said it would take at least another four years before gas flows commenced, given especially the complexities intrinsic in constructing an undersea pipeline between the two countries.

In August, the Sultanate signed a landmark MOU for the supply of Iranian gas potentially worth billions of dollars over a 25-year period.

As a first step, both sides are studying viable routes for the laying of a gas pipeline that will transfer Iranian gas to the sultanate.

He noted that a pipeline project of this nature was fraught with many technical challenges, including seabed conditions, long time required for pipeline procurement and construction, among other factors. “So we will take one step at a time,” he remarked.

Oman Oil Company (OOC), the country’s flagship energy investment firm, is the Omani side of the joint project.

Zanganeh had announced at the time that under the deal, gas exports to Oman would start in less than two years.

He had also stated that gas contracts were mainly signed for a 25- year period, adding total value of the exports would hit $60bln at current gas prices.

The gas transfer deal with Oman is reportedly the largest economic agreement between the two countries so far.

“The agreement on the gas pipeline dates back to 10 years ago when negotiations over the pipeline started, but the two countries could not finalise it. The main reason was lack of agreement on the price of the gas that was supposed to be exported,” said Ali Akbar Sibeveih, Iran’s ambassador to Oman, in September.

In addition to enrgy projects, the two countries are also working to create a North-South corridor project that will form a strategic transit route to provide a convenient way for the transport of goods from Central Asia to the Persian Gulf.

Two-way trade between Iran and Oman currently stands at $200 million a year.