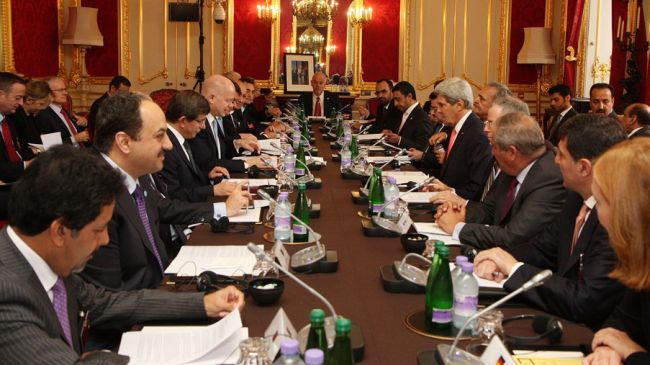 Representatives of Syria opposition coalition and foreign ministers of the so-called Friends of Syria group meet in London on October 22, 2013.

US Secretary of State John Kerry says foreign-backed opposition groups in Syria are doubtful about participating in the upcoming peace talks in Geneva.

“They have to make up their mind,” Kerry said after meeting with opposition leader Ahmad al-Jarba on Tuesday.

The US top diplomat said that Jarba’s coalition groups are set to meet next week to decide whether to participate in the Geneva II conference, scheduled to be held next month.

After a meeting in London on Tuesday between the representatives of Syria’s opposition coalition and foreign ministers from the so-called Friends of Syria group — the United States, Britain, France, Saudi Arabia, Egypt, Germany, Italy, Jordan, Qatar, Turkey and the United Arab Emirates — UK Foreign Secretary William Hague said the participants have agreed that Syrian President Bashar al-Assad “would play no role” in the future of Syria.

The Syrian government has said that it will participate in the Geneva talks, but will not negotiate with “terrorists.”

Foreign-sponsored militancy in Syria has taken its toll on the lives of more than 100,000 people and led to the displacement of millions, according to figures released by the United Nations.