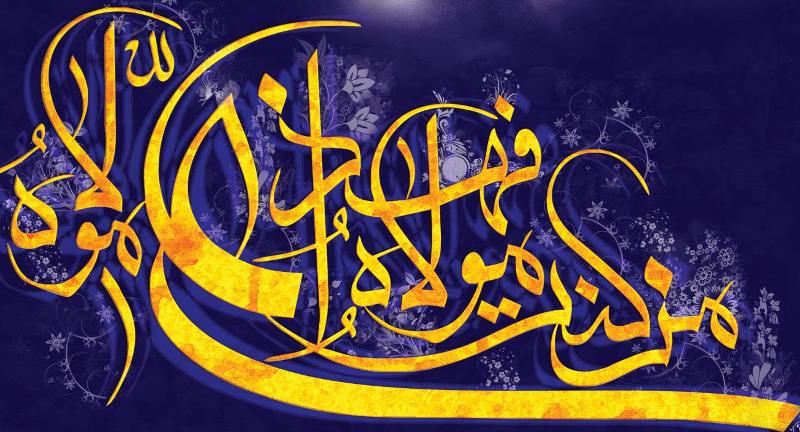 TEHRAN, Oct. 23 (MNA) – Thursday the 24 October 2013 (18th ofZil-Hejjah), marks Eid-e GhadirKhum, the day Prophet Muhammad(S) Designated Imam Ali(AS) as hissuccessor in the year 10 AH as per Allah’s command near Juhfa in the Arabian Peninsula, while returning from his farewell Hajj pilgrimage.

Juhfa, a short distance from Mecca was near to a small pond (Ghadir) called Khum. It was here that the most important event in the history of Islam, which nobody can ever forget, occurred. Morethan 120,000 pilgrims were returning from the last Hajj of the Prophet. It was that the Prophet ordered the pilgrim caravan to halt.

It was blistering hot, but the Prophet stooped to hold congregational afternoon prayers. He then ordered that a pedestal of camel saddles be erected. He stood on his pedestal where everyone could see him and started to speak. His speech was so eloquent and so sweet that people all forget the heat. The speech of the prophet was of great importance and quite long and contained some very interesting and important points. Some of the most important points should be mentioned here: He stated: “O people! I am a human being like you. In the near future, Izrail, the angle of death, will come as a messenger from our Creator and I will accept his invitation of death. Yes, I will soon, leave you, but I will leave you two worthy and priceless reminders (Thaqalayn) of me.”

The people were all ears. The Prophet told the people that these two worthy things would fill his empty place and that he would introduce them to the people. All were listening with great curiosity, when he continued; “people! The first and greatest thing I leave with you is God’s Book, the Book of light, filled with knowledge and guidance. O people! Take God’s Book and keep to it.” In this part of his speech he recommended and encouraged people to act according to the Quran.

Then he said: “People my second trust I leave in your care are my immediate household members( Ahl al-Bait)” Here the Holy Prophet(S) paused, as if he knew the followers, would oppress his Ahl al-Bait, and then he said “ yes” three times.  “People! In your dealings with my Ahl al-Bait, I ask you to remember God. Don’t be curt in regard to their status.” After pausing again he continued: “I inform you, from the time you grasp onto these two reminders of me, be sure, you will never go astray. And know this, that without any doubt, the Quran and my Ahl al-Biat will never be separated from on another till the day of resurrection when they will join me by the fountain of Kauthar.”

The Prophet spoke the last sentences with particular firmness. The people were certain that he put special emphasis on those subjects. Then he said: “Yes, I swear by God, in that time- the day of resurrection- and besides the fountain by Kauthar, I will ask both of them- the Qur’an and my relatives- how they were treated after me.” The words of Prophet were full of meaning. Another important event that happened on that scorching hot day of Ghadir, was that the Prophet asked Imam Ali (AS) to come to him.

He took Ali’s (AS) hand and said: “O people! Do you know that Allah is my Master and I am the master of believers and I am worthierthat they?” They said: “Yes Messenger of Allah.” He then said: “Of whomsoever I am master Ali (AS) is his master too. O Allah! Love the one who loves Ali (AS) and humiliate the one who bears enmity to him.”Salman al-Farsi (the Persian), one of his closest companions of the Prophet, stood up and said: “What kind of vicegerency?” He said: “a vicegerency like vicegerency upon the one whom I am worthier than.” Thereafter, the Allah the Exalted revealed: “Today, I have perfected for you your religion, completed my favors upon you…” (Holy Qur’an 5:3)The prophet proclaimed Allah’s greatness (Allahu Akbar), saying the completion of my prophet hood and the perfection of Allah’s religion are only after Ali’s(AS) vicegerency after me.”At this moment Abu-Bakr and Omar stood up and said: “O Messenger of Allah, does this verse exclusively after to Ali(AS)?”

The Prophet said: “Yes, it refers to Ali(AS) and my legatees till the Day of Judgment.” They said: “O Messenger of Allah, name (mention) them to us.” The Prophet(S) said: “Ali(AS), my brother, my successor (vasir), my heir, my legatee, my vicegerent amongst my ummah and custodian of every believer after me. Then, my ( grand) son Hassan(AS), then Hussein(AS), followed by nine morefrom the progeny of Hussein(AS). They are with the Qur’an and the Qur’an is with them. They all not separate from it and the Qur’an( too) shall not separate from them until they will joint by the fountain of Kauthar.”

Before this, the Holy Prophet(S), in the pact of brother hood, proclaimed that believers were each other’s brothers and even ordered them, two by tow. To make brotherhood pacts.  This made it clear that the rank of brother was higher than that of a friend. However, on that memorable day of Ghadir, Ali(AS) was not given the title of friend or brother but was considered higher and introduced as supervisor and authority, a governor, the leader and Imam of all Muslims.

On that day, Ali (AS) was officially designated as the Prophet’s successor. He had all ranks of the Prophet expect, of course, the prophethood. From the spiritual point of view, Imamate is somewhat like prophet hood, a shower of divine grace for mankind. It is important to know that Imamate literally means to “lead” and Imam Means “leader”. In Islamic terminology, Imam Means divinely appointed successor of the Prophet who is to be obeyed in both secular and religious matters. In many cases, Islam has provided human beings with outlines and general principles, which are to be explained and interpreted by those who are divinely guided and gifted to execute this task. The Imams are infallible men entrusted by Allah with the task of guiding the community, safeguarding the divinely revealed religion, expanding the Islam system, and applying the principle of Islam in practice to overcome the evils of society.

Eid -ul-Ghadir in the Saying of Infallible:

“The Day of Ghadir is day of high status( for all believers all).” Imam Ali (AS)

“Eid al Ghadir is superior to Eid al-Fetr, Eid al-Adha, Friday and the day of Arafa, and it has a greater honor before Allah.” Imam Ja’farSadeq (AS)

“Eid -ul-Ghadir is more famous in the heaven than on earth.” Imam Ja’farSadeq (AS)

Not only on that memorable day of Ghadir but also on several occasions, the Prophet enumerated the merits of Imam Ali(AS).He said:” Of whomsoever I am Prophet then Ali(AS) is the Chief.” He said: “I and Ali(AS) are one and from the same tree, and the other people are from different trees.” He also said: “Your position to me is of Aaron(AS) to Moses(AS), except there will be no Prophet after me.”And he married him to his daughter, Hazrat Fatema Zahra(SA), the Chief of the ladies of the worlds.

And he made for him lawful whatever was lawful for himself in the mosque. And he closed all doors( leading to mosque) except the door of his house. He entrusted to him his knowledge and wisdom. He said: “I am the city of knowledge and Ali(AS) is its gate. One who wishes (to enter)the city (of knowledge) and wisdom should enter through its gate.” He also said:” you are my brother, successor and inheritor. Your flash is from my flash and your blood from my blood, and peace with you is peace with me and fighting against you is fighting against me.

And faith is mixed with your flesh and your blood, and it is mixed with my flesh and my blood. And tomorrow, you will be my companion at Fountain of Kauthar. And you will pay my debt and you will fulfill my obligations. And your true followers (Shi’s) will be (sitting) on the pulpits of light; they, with their bright faces surrounding me, will be my neighbors in paradise.” The Prophet also said: “O Ali(AS), had you not been there, the believers would not have been recognized after me.”

On the threshold of the auspicious occasion, let’s renew our allegiance to Imam Ali (AS) and pray to God for the reappearance of the Prophet’s 12th infallible successor, Imam Mahdi(AS) who will eradicate all injustice and establish the global government of peace and justice.