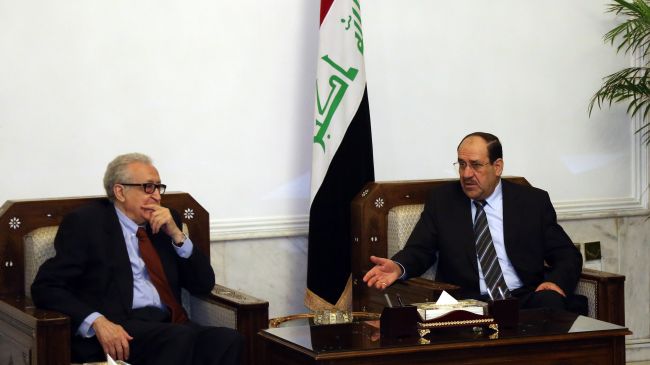 Iraqi Prime Minister Nouri al-Maliki has reiterated Baghdad’s support for a political solution to the deadly unrest in Syria, saying a military option has reached a “dead end.”

“The arrival of military options at a dead end and the growing conviction of the need to reach a political solution to the crisis” have increased the odds of a successful push for peace, said Maliki in a statement on Monday.

The statement was issued following Maliki’s meeting with UN-Arab League Special Representative for Syria Lakhdar Brahimi in the Iraqi capital, Baghdad, on Monday. Brahimi is on a regional tour to muster support for the planned Geneva peace conference on the Syrian crisis, which is expected to be held in November.

The Iraqi leader further stressed that Baghdad is ready to throw its weight behind Brahimi’s initiative to mediate a political solution “for all Syrians and the region.”

During a joint press conference with Brahimi on the same day, Iraq’s Foreign Minister Hoshyar Zebari also underlined that a peaceful settlement of the foreign-sponsored unrest in Syria in the interest of the Syrian nation.

The UN-Arab League envoy, for his part, called on all countries “with interests and influence in the Syrian affair” to take part in the peace conference, proposed by Russia and the United States on May 7.

The date of the long-delayed conference has changed many times as Syria’s foreign-backed opposition coalition remains divided over participating in the second round of Geneva talks. Moscow and Washington are also at odds over who should attend the event, known as Geneva II.

Syrian President Bashar al-Assad said in an interview with Lebanese TV station al-Mayadeen on Monday that “factors are not yet in place” for a successful meeting on Syria, which has been the scene of turmoil since March 2011.