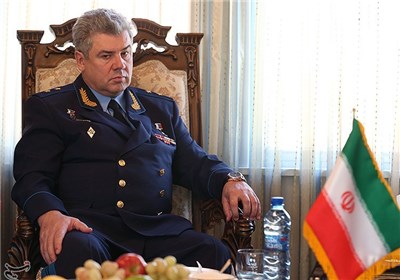 Heading a high-ranking military delegation, Bondarev has travelled to Tehran at the invitation of Iran’s air force commander.

“What I saw today is a testimony to the fact that the IRGC has stepped forward far beyond the time,” he pointed out.

After the meeting, Brigadier General Amir Ali Hajizadeh said he has presented the Russian commander with a Scan Eagle drone, developed domestically by the IRGC, adding, “The drone made by the IRGC reflects part of the Islamic Iran’s technical capabilities. Today, we gave a working prototype of the drone to Major General Viktor Nikolayevich Bondarev and the Russian nation as a present.”

In December 2012, Iran captured a US Navy Scan Eagle drone, and has been able to mass produce it after some modifications.

On December 4, 2011, an American Lockheed Martin RQ-170 Sentinel unmanned aerial vehicle was captured by Iranian forces near the city of Kashmar in northeastern Iran. The drone was brought down by the Iranian Army’s electronic warfare unit which commandeered the aircraft and safely landed it.

After capturing the aircraft, Iran announced that it intends to carry out reverse engineering on the captured RQ-170 Sentinel stealth aircraft, which is similar in design to a US Air Force B-2 stealth bomber.