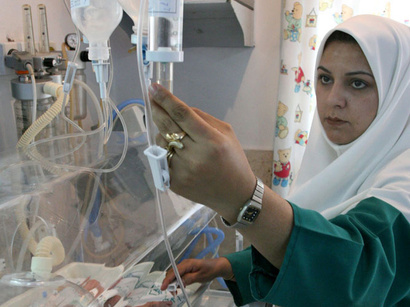 Nurses have held a protest in the Imam Khomeini Hospital. They were protesting the lack of medical personnel and a forced increase of their working hours, Secretary General of the Nursing Council Mohammad Sharifi Muqaddam said, ILNA agency reported on Monday.

Although the hospital’s income has increased in the past five years,the nurse’s salaries have stayed the same.

The protest lasted two hours. The physician-in-chief of the hospital met with protesters, listened to their demands and promised to quickly solve the problem.

Iranian hospitals face a nurse shortage, the Iranian media reported. The majority of the nurses leave the country believing that they will get higher salaries abroad.

According to the international standards, there are two nurses per one patient; however this figure is two times less in Iran.