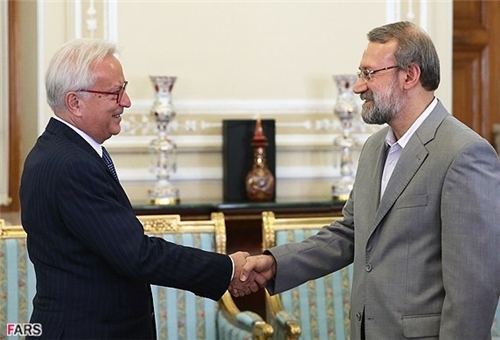 TEHRAN (FNA)- Top legislators from Iran and the European Parliament (EP), in a meeting in Tehran, stressed the two sides’ remarkable capacities and potentials for expanding cooperation, and expressed hope that the relations between the two sides would witness further growth in all fields in the near future.

“The business and economic relations between Iran and EU would have mutual interests for the peoples on both sides of that equation,” Iranian Parliament Speaker Ali Larijani said in a meeting with Head of the Socialist Fraction of EP Hannes Swoboda on Sunday.

Swoboda, for his part, emphasized that reaching agreement with Iran is of great importance for the EU because Iran is an influential and powerful regional actor.

The EP lawmaker said that reaching agreement with Iran and returning to the past status of Iran’s relations with the European Union countries is of significant importance for the EU.

“If that will come true, we can hope that Iran would emerge as one of the influential partners of Europe in such sensitive and important fields as campaign against narcotics, fight against terrorism, and commercial and economic transactions,” said underlined.

The European parliamentarian at the end once again asked for ever more participation of Iran in issues of mutual interest at regional and international levels.

The EP delegation, comprised of three Socialist European lawmakers, arrived in Tehran on Saturday for a four-day visit.

On October 27, 2012, a 15-member delegation of European parliamentarians was to pay a visit to Tehran, but later the trip was cancelled because the EP delegation set a precondition for the visit, and Iran did not accept their prerequisite.

“The European parliamentary delegation has set a precondition for visiting Iran and will not accept this prerequisite as it runs counter to our policies,” senior advisor to the Iranian parliament Speaker Hossein Sheikholeslam told FNA at the time.

“The European parliamentary delegation, more than anything else, was after stirring tension and providing the ground for negative propaganda against Iran,” member of the Iranian Parliament’s National Security and Foreign Policy Commission Ebrahim Aqa-Mohammadi said, referring to the European lawmakers’ cancelled visit to Iran which was announced after Tehran didn’t accept EU’s preconditions for such a trip.

According to the Iranian lawmaker, the European parliamentarians had demanded a meeting with a number of Iranian prisoners as their precondition which was not accepted by Iran.