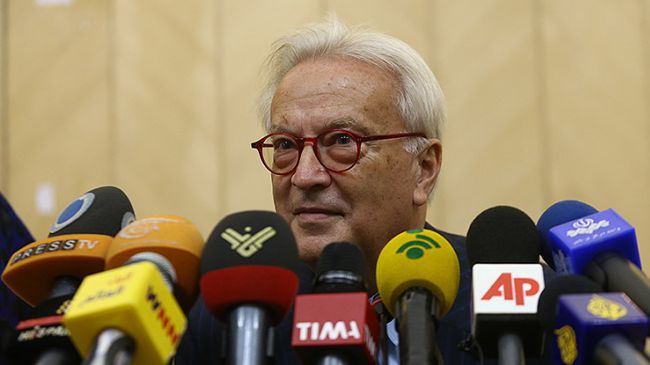 The EP hopes sanctions against Iran over its nuclear energy program will be lifted within the next few months, Swoboda told reporters in Tehran on Monday.

The EP agrees that Iran should assert its rights in line with international regulations and within the framework of the nuclear Non-Proliferation Treaty (NPT), he stated.

He added that the European Parliament calls on Iran to build confidence and allow inspectors of the International Atomic Energy Agency (IAEA) to inspect the country’s nuclear sites.

In response to a question about the European Union’s opinion about Iran’s recent proposal presented to the six world powers in Geneva, Swoboda said the West seeks to proceed with negotiations with Iran to reach a solution to the nuclear issue.

Iran and the five permanent members of the UN Security Council – the United States, China, Russia, France and Britain – plus Germany held two days of negotiations over Tehran’s nuclear energy program behind closed doors on October 15-16 in the Swiss city of Geneva.

On the first day of the closed-door negotiations, Iranian Foreign Minister Mohammad Javad Zarif presented Tehran’s new proposal titled “Closing an Unnecessary Crisis, Opening New Horizons” to the participants. The two sides have agreed to keep the details of the proposal confidential for the time being.

Swoboda further said that the European Parliament would cooperate to lift sanctions against Iran and added that the parliamentarians have presented proposals to resolve the nuclear issue.

He emphasized that the EP has plans to move towards a Middle East free of nuclear weapons and noted that such efforts would also include Israel’s nuclear warheads.

Israel is believed to be the only possessor of nuclear weapons in the Middle East, with hundreds of nuclear warheads.