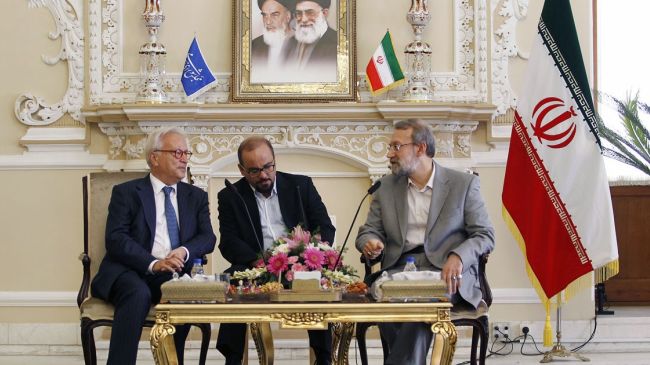 A senior European Union (EU) parliamentarian says the establishment of constructive relations with the Islamic Republic is of great importance to the EU.

In a meeting with Iran’s Majlis Speaker Ali Larijani on Sunday, Hannes Swoboda said Tehran can be an important partner for the EU when it comes to key issues such as fighting narcotics and terrorism as well as economic and commercial cooperation.

Swoboda is leading a three-member European Parliament delegation who arrived in Tehran on Sunday to hold talks with the country’s senior officials.

Hailing Iran as an important and influential country in the Middle East, Hannes said Tehran and EU share common views about numerous issues.

Larijani, for his part, said Europe has always been a trade partner for Iran and added that economic relations between the two sides serve the interests of both Iranian and European nations.

Commenting on the Iran’s presence in the forthcoming Geneva 2 conference on the unrest in Syria, the EU parliamentarian said Tehran should participate in the talks as an influential and powerful regional player.

Swoboda noted the EU Parliament is opposed to foreign and military intervention in Syria, adding that the Syria crisis could only be resolved through political means and the participation of all Syrians in the political process of their country.

The Geneva 2 conference is seen as a chance to find a political solution to the Syria conflict. According to reports, the talks are likely to be held in late November.

Russia and China and the UN have urged the presence of Iran in the conference.