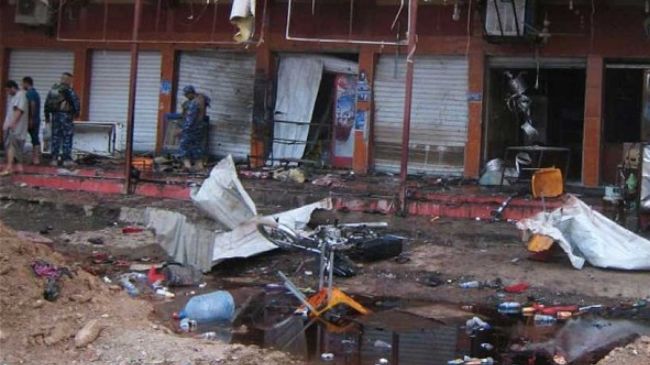 Police and hospital sources say at least thirty-four people have been killed and many more injured when two bomb attacks targeted a café in the Iraqi capital, Baghdad.

The officials said the Sunday blasts took place in Baghdad’s southern neighborhood of al-Amil, and wounded at least 50 people.

A police colonel, speaking on condition of anonymity, said a roadside bomb went off near a street cafe, after which a bomber on foot detonated explosives when people had gathered at the scene.

Earlier in the day, fifteen people were killed in a series of bomb attacks on security personnel and government buildings across Iraq.

Police Captain Mohammed Ahmed al-Rawi said two bombers on foot and another driving an explosive-laden car attacked the police headquarters in the town of Rawa, situated 260 kilometers (160 miles) northwest of Baghdad, on Sunday.

He added that another car bomb explosion targeted an army checkpoint at the town’s entrance.

Another three bombers on foot and a fourth in a vehicle stormed the local administrative headquarters in Rawa.

Local council member Suhaib al-Rawi said officials were meeting at the building when the bombers struck.

Doctor Wael Fawzi said the dead from the bombings in Rawa included three members of the local council, three police officers, a child and another person, adding that 28 people were also wounded.

Also on Sunday, a roadside bomb and a car bomb exploded near a police lieutenant colonel’s convoy in south of the city of Samarra, located 125 kilometers (78 miles) north of Baghdad, killing six people and wounding seven others.

In another attacks on the same day, gunmen shot dead a man in south of Baghdad, and a roadside bomb in the capital wounded six people.

According to figures based on security and medical sources, more than 480 people have been killed so far this month in Iraq, and almost 5,200 since the beginning of the year.

Iraq’s Interior Ministry has said that militants have launched an open war in Iraq and want to push the country into chaos.