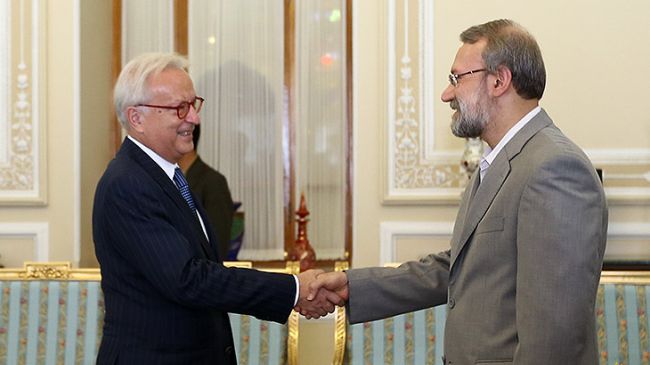 In a meeting with the head of a delegation of three Socialist European Parliament lawmakers, Hannes Swoboda, in Tehran on Sunday, Larijani said Majlis supports the ongoing trend of nuclear talks and urged the six world powers to stop seeking pretexts on the issue.

Iran and the five permanent members of the UN Security Council – the United States, China, Russia, France and Britain – plus Germany held two days of negotiations on October 15-16 over Tehran’s nuclear energy program behind closed doors in the Swiss city of Geneva.

Both Iran and the six major world powers sounded an upbeat note following the meetings, where Tehran tabled its proposals to end the nuclear standoff. They agreed to meet again in Geneva on November 7-8.

Larijani further said that Europe has always been a trade partner for Iran and added that economic relations between the two sides serve the interests of both Iranian and European nations.

He stated that Iran has always had appropriate cooperation with European countries in issues such as terrorism, smuggling of narcotics and Tehran’s nuclear energy program.

Swoboda, for his part, said Iran is a leading and influential country in the region and reaching an agreement with Tehran and resuming constructive ties are very important for the European Parliament.

He expressed hope Iran would be an influential partner to Europe and the West in sensitive and key issues such as trade and economic exchanges and in the fight against narcotics.

The European lawmaker called for Iran’s more participation in joint activities at regional and international levels.

The delegation of European Parliament lawmakers arrived in Tehran on Saturday for a four-day visit. The three Socialist European lawmakers attended an open session of Majlis and held a meeting with Chairman of the Majlis National Security and Foreign Policy Committee Alaeddin Boroujerdi on Sunday.