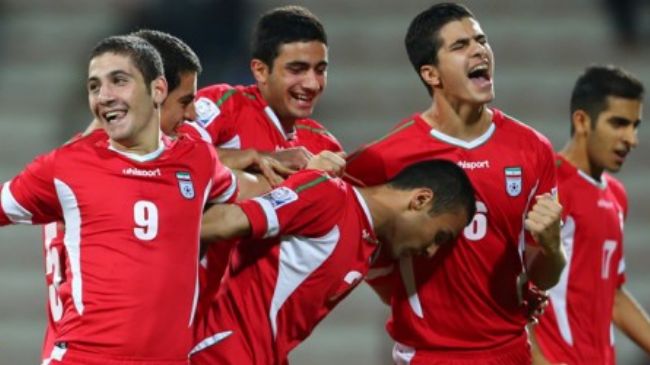 Iran’s under-17 national soccer team has gained a precious draw against Argentina in its first match at the 2013 FIFA U-17 World Cup in the United Arab Emirates.

The Iranians drew 1-1 with the Argentines in a Group E match at al-Rashid stadium in Dubai on Saturday.

Mostafa Hashemi scored Iran’s solo in the first minute of the game with a half-volley from distance that caught Argentine goalie Augusto Batalla off guard.

Despite Iran’s heavy pressure, the Argentines managed to find the equalizer through Sebastien Driussi, who sent the ball past Iranian goalkeeper Mahdi Amini after receiving a cross near the top of Iran’s penalty area in the 15th minute.

“Inventive, assertive, and fearless Iran were the better side from start to finish and were only held back by an inability to take one of the many half-chances that dropped their way,” reported the website of Abu Dhabi-based sports newspaper Sport 360.

Both teams had several good chances throughout the encounter, but the second goal remained elusive for both sides.

In the 82nd minute, Argentina’s Lucio Compagnucci was sent off the pitch after getting a second yellow card.

In another match of the day in Group E, Australia and Canada drew 2-2.

The Iranians will face Canada in their second match on October 22.

The 15th round of FIFA U-17 World Cup kicked off in October 17 in UAE and will wrap up in November 8.