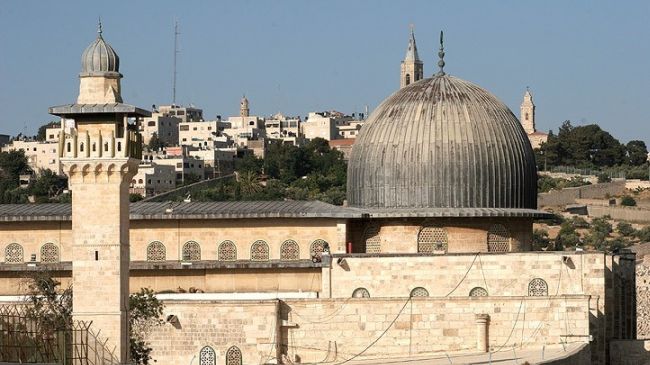 Afkham on Sunday urged international and Islamic bodies to denounce the sacrilegious moves against divine religions, particularly Islam, in the occupied Palestinian lands.

She also called on these organizations to carry out their heavy responsibility by adopting strategies and taking decisive measures to stop the violation of the sanctity of al-Aqsa by Zionists.

A recent report says the Israeli regime is planning to build a synagogue in the al-Aqsa Mosque compound as part of its efforts to further Judaize the occupied Palestinian territories.

According to the report recently published by the al-Aqsa Foundation and based on the information leaked from the Israeli Knesset, the plan will divide the compound, taking one-fifth for the Jews in order for them to perform their religious rituals there.

He called on all Palestinians to act against the expansionist measures of the Tel-Aviv regime across the occupied territories, particularly in al-Quds (Jerusalem).

On October 14, dozens of extremist Israeli settlers stormed the al-Aqsa Mosque under army protection and raised an Israeli flag inside the mosque, which is the third holiest site in Islam.

Local media reported that a group of settlers raised an Israeli flag while touring the mosque’s compound.

The latest incident comes after a similar event on September 18, when Israeli forces stormed the mosque compound, firing tear gas at Palestinian worshippers.

Clashes reportedly broke out between the Israeli troops and the Palestinians after they attempted to prevent the worshippers, including women and children, from entering the mosque.