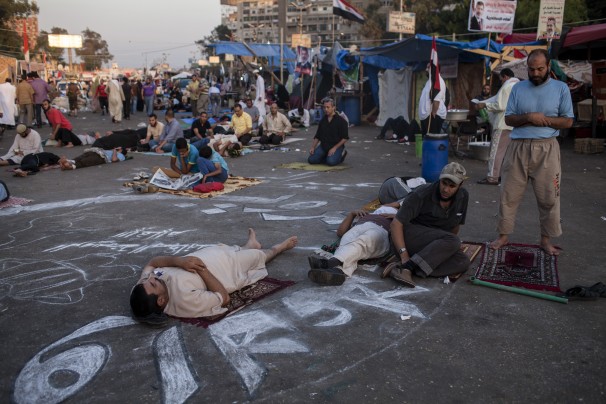 Large crowds of pro-Morsi demonstrators gathered in the cities of Cairo, Alexandria, Damietta, and Suez on Friday afternoon.

The rallies were called by Egypt’s largest Islamic movement Muslim Brotherhood as well as by the country’s largest anti-government group, Pro-Legitimacy Alliance.

The military-backed interim government has been stepping up security to prepare for Friday’s planned demonstrations by sealing off major squares and streets and deploying tanks and troops.

However, some incidents of violent clashes between protesters and security forces have been reported in Cairo and its adjacent areas. Latest reports say several people were also injured in fierce clashes between Morsi-supporters and police forces in the Nile Delta city of Zagazig.

Morsi’s supporters have been holding weekly rallies against the army-backed government for its deadly crackdown on Brotherhood supporters that has led to hundreds of deaths and detentions.

The situation in Egypt remains tense months after the country’s first democratically-elected president was ousted by the military.

Egypt has been experiencing unrelenting violence since July 3, when the army ousted Morsi’s government, suspended the constitution, and dissolved the parliament. It also appointed the head of the Supreme Constitutional Court, Adly Mahmoud Mansour, as the new interim president.

The government of Mansour has launched a bloody crackdown on Morsi supporters and arrested thousands of Brotherhood members, including the party’s leader, Mohamed Badie, who was detained on August 20.

Hundreds of supporters of the group have been killed in clashes with army since then.

Morsi himself is scheduled to be tried next month on the charge of inciting the killing of his opponents while in office.