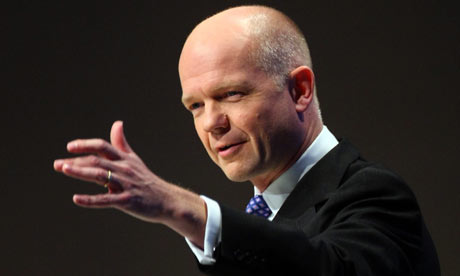 British Foreign Secretary William Hague says London will hold an international conference hosting the Syrian opposition and the so-called “London 11” as a preparation for the planned Geneva II peace talks.

Hague said on Friday representatives of the Syrian opposition and the foreign ministers of the “London 11” — which includes Britain, Egypt, France, Germany, Italy, Jordan, Qatar, Saudi Arabia, Turkey, the UAE and the US — will take part in the meeting.

He added that conference would “discuss preparations for the Geneva Conference, support for the [opposition] Syrian National Coalition, and our efforts to achieve a political settlement to this tragic conflict.”

The announcement came as Russia and the US have been pushing to bring the Syrian government and the opposition to the negotiating table.

The United States says it is making efforts to convince so-called Syrian National Council (SNC) to join the peace talks planned for next month in Geneva.

“There have been many ups and downs in this process. And that’s not unexpected given how challenging the situation is on the ground,” US State Department spokeswoman Jen Psaki said on Tuesday.

“But we continue to press for the opposition to have a representative body at the Geneva conference,” she added.

The SNC, which is the biggest bloc within the foreign-sponsored Syrian opposition coalition, has said that it would not join the forthcoming Geneva 2 conference on the ongoing crisis in the Arab country, and would quit the coalition if it partakes in the conference.

The Geneva 2 conference is seen as a chance to find a political solution to the Syrian crisis. The event has been delayed for months, but Moscow and Washington are now trying to fix a date for it in mid-November.