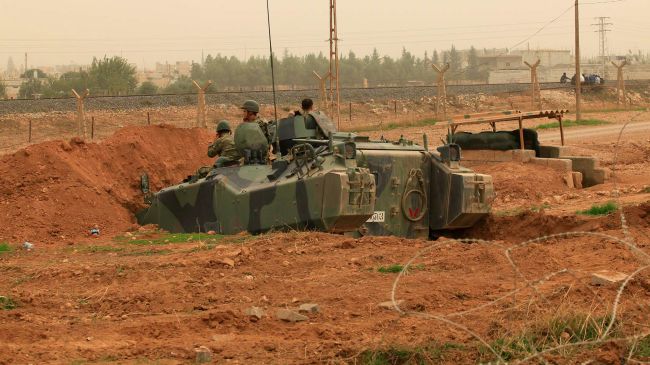 A Turkish army vehicle takes position at the border with Syria. (file photo)

A senior journalist says Israel is active on the Syrian-Turkish border and moves “things” to Syria through Turkey.

“You cannot have fighters sneaking across the border at night with backpacks or leading a mule and be able to supply an army like that. You have to be taking lots and lots of stuff through the checkpoints. So, the Turks’ saying that they are not letting anything through is just absolute baloney,” Jim W. Dean, the managing editor and columnist at the Veterans Today from Atlanta, told Press TV on Friday.

“We have intelligence that the Israelis are active on the (Turkish-Syrian) border and the Israelis whenever they want to move something through a checkpoint, they never take a chance that anything will go wrong and the only way you can do that is you have to have control over that checkpoint,” he added.

Dean when on to say that “Turks are actually allowing the Israelis to have control only around the night shifts or certain points, so they can move things through and then the Turks can say we do not know anything about that. So, they are just that they do not know what is going on and they cannot be held responsible, but obviously they are.”

This is while, the rise of al-Qaeda-linked militants in northern Syria has left Turkey with a new security threat and raised serious speculations about Ankara’s policy towards the crisis in the Arab country.

On Tuesday, the Turkish soldiers shot four rounds from self-propelled artillery guns at positions in the Syrian border town of Azaz under the control of the al-Qaeda-linked Islamic State in Iraq and the Levant (ISIL).

After fighting with forces of the so-called Free Syrian Army (FSA) on September 18, the Takfiri militants overran the northwestern town, a former commercial and industrial hub located five kilometers (two miles) from Syria’s border with Turkey.

This is the first time for Turkey to get engaged in such an attack. The Turkish government has itself been blamed for supporting al-Qaeda-linked groups fighting against the government of Syrian President Bashar al-Assad.

The United Nations said earlier that more than four million more Syrians will be forced out of their homes in 2014 by the escalating conflict in the country.

Two million Syrians are expected to take refuge outside the country while another 2.25 million are predicted to be internally displaced in the next year.