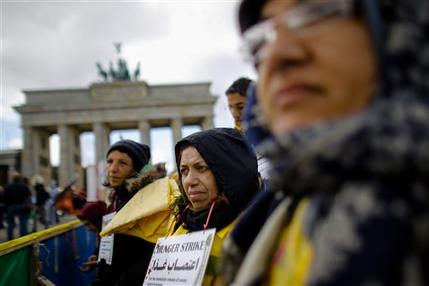 Iranian protesters outside US embassy in Berlin

BERLIN (AP) — Iranian dissidents are demonstrating outside the U.S. Embassy in Berlin, pushing for action after the killing of 52 of their compatriots in Iraq.

A dozen Mujahedeen-e-Khalq members protested in front of the embassy Friday, next to the landmark Brandenburg Gate.

The group accuses the Iranian and Iraqi governments of involvement in the Sept. 1 shooting at Camp Ashraf in which roughly half the camp’s U.N.-protected population was killed. The dissidents claim seven MEK members are being held by Iraq.

Iraq denies any involvement, saying the killings were an internal dispute. The U.N. has investigated but hasn’t determined who was responsible.

The group, which is strongly opposed to Iran’s clerical regime, has been protesting since early September, calling for international pressure on Iraq to get to the bottom of the killings.