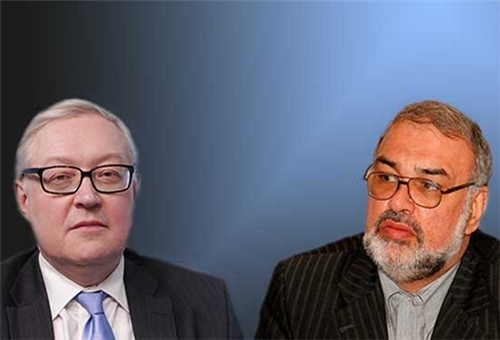 TEHRAN (FNA)- Iranian and Russian officials in a meeting in Moscow discussed the two days of intensive talks between Iran and the six world powers which were held in Geneva, Switzerland, on October 15-16.

Iranian Ambassador to Moscow Reza Sajjadi and Russian Deputy Foreign Minister Sergei Ryabkov talked about four rounds of talks between Iran and the Group 5+1 (the five permanent members of the UN Security Council plus Germany) in Geneva.

The two diplomats met a day after Iran and the six countries wrapped up two days of negotiations over Tehran’s nuclear energy program in Geneva.

On Wednesday, Iran and the Group 5+1 issued a joint statement at the end of their fourth session of talks in Geneva.

“Delegations of the EU3+3 and the Islamic Republic of Iran, led respectively by the EU high representative for foreign and security policy and the foreign minister of the Islamic republic of Iran, held two days of substantive and forward-looking negotiation in Geneva on 15th, 16th October 2013,” said the statement.

“Building on the positive atmosphere of the first ministerial meeting in New York on 26th September, the foreign minister of the Islamic Republic of Iran presented an outline of a plan as a proposed basis for negotiation, which is being carefully considered by the EU3+3 as an important contribution,” it added.

“Members of delegations followed with indepth bilateral and joint consultations on various elements of the approach, it was decided to convene the next meeting in Geneva on ‘November 7,8′.”

“The participants also agreed that the EU3+3 and Iranian nuclear, scientific and sanctions experts will convene before the next round to address differences and to develop practical steps,” it concluded.

Top negotiators from Iran and the six world powers ended their fourth and last round of talks at the UN offices in Geneva on Wednesday afternoon.

The fourth session which was attended by Iran’s Foreign Minister Mohammad Javad Zarif and EU foreign policy chief Catherine Ashton, who presides over the delegations of the six world powers in the talks with Iran, lasted only for a few minutes.

The seven sides had two sessions of talks on Tuesday morning and afternoon and two more meetings on Wednesday.

The first session started by the remarks of Iranian Foreign Minister Mohammad Javad Zarif, who presented Iran’s new three-staged package of proposals to the delegations of the six world powers.

Zarif and EU foreign policy chief Catherine Ashton, who presides the delegations of the six world powers in the talks with Iran, did not take part in the second and third sessions.

In the first session, Zarif said he would come back to take the lead of the Iranian team when his counterparts from the Group 5+1 (the five permanent UN Security Council members – the US, Britain, China, Russia and France – plus Germany) take part in the talks.

Yet, the fourth session was attended by both Zarif and Ashton.

The third round of talks a little after midday (Geneva time) was postponed for two hours after the delegations of the six world powers demanded for a delay to discuss Iran’s proposals in an internal meeting.

During their third meeting, which lasted for two hours on Wednesday afternoon, the negotiating teams of Iran and the G5+1 decided to continue the talks over the former’s nuclear issue on November 7 and 8.

The two sides decided to have their experts committees to be comprised of their nuclear and sanctions experts in the November meeting.

During the meetings, Iran presented a three-staged package of proposals to the opposite sides which includes confidence-building measures for a settlement of the Iran-West nuclear standoff.

The Iranian and G5+1 officials also held some bilateral meetings on the sidelines of their multilateral talks, which included two meetings between Zarif and Ashton, a meeting between Iranian Deputy Foreign Minister Seyed Abbas Araqchi and Head of the US delegation Windy Sherman and also two meetings between Araqchi and his Russian counterpart Sergei Ryabkov.

Both Iran and the world powers have described the meetings yesterday as “positive” and “constructive”.

Araqchi, who is also the spokesman and the number two person in the Iranian team, told reporters that “the negotiations were held in a highly positive atmosphere and the two sides were serious when speaking of their issues”.

He said that the world powers have welcomed the general points of Tehran’s proposals on the settlement the country’s nuclear standoff with the West, adding that Iran is seeking to encourage the opposite side to pursue a common goal for the negotiations.

“The Group 5+1 member states welcomed the generalities of Iran’s plan,” Araqchi told reporters before the start of the Tuesday afternoon meeting.

And then after the second session on Tuesday, a diplomatic source present in the negotiations said the delegations of the six world powers have shown a positive and constructive reaction to the details of Tehran’s proposals.

“The atmosphere dominating the meeting was positive and constructive and the negotiations will continue tomorrow morning,” a diplomatic source close to the Iranian delegation told FNA after the end of the second session of the Tuesday talks between Tehran and the G5+1.

“Both sides (Iran and the six world powers) showed a serious attitude during the meeting and negotiations and several questions and answers were asked and answered face-to-face,” the source added.

The diplomat said the two sides discussed “the details of Iran’s three-staged proposal” and “the Iranian side elaborated on its plan”.