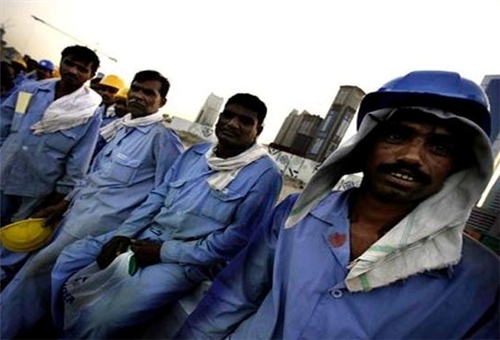 A German filmmaker has confirmed an earlier press report about migrant laborers in the Persian Gulf country of Qatar, working in terrible conditions with no salaries for months and their passports confiscated by employers.

The filmmaker, Peter Giesel, and his cameraman were arrested and jailed by authorities in the tiny Arab monarchy, which is preparing to host the World Cup football competitions in 2022, after they attempted to further investigate an earlier report by the UK-based Guardiannewspaper on appalling labor abuses by the Qatari regime, RT reported Thursday.

According to the report, Giesel said the two were arrested in their hotel rooms on October 3 and taken to police headquarters, where “all their equipment was impounded.”

Qatari police then transferred the filmmakers to the State Security prison in the suburbs of Doha, the report adds.

In an interview with RT, Giesel further explained that the two were then placed in separate cells for 21 hours and were not allowed to make a single phone call “not to our embassy, not to our families.”

“No one was there to tell us what the charge was really, so we were kind of desperate in there, not having any contact with the outside world,” Giesel emphasized.

Before being arrested, Giesel and his cameraman met with migrant workers who told them about their predicament.

He said one of the men he interviewed worked for 12 years as an accommodation specialist, but “ironically, his accommodation itself doesn’t even have a fan.”

Giesel further explained that the man “hasn’t been getting his salary and bonuses for a number of years, and his main difficulty is to fight a case against his boss and his firm: the employer took his passport from him, and the 35-year-old worker hasn’t made the money necessary to return home.”

Another group of guys, the German filmmaker added, “weren’t paid for seven months in a row” and were trying to file a case when he met them.

As Giesel explained, the key issue surrounding migrant workers is that “they are employed under the so-called kafala system, which is a law basically stating that every migrant worker that comes into Qatar has to find his own personal sponsor meaning his boss, the firm ,or corporation he’s working for.”

“And that sponsor has to take care of him legally and medically, but obviously, most of the sponsors take their passports away from the migrant workers. That puts maybe tens of thousands of them in a miserable situation. They can’t make any money to go home, so they’re trapped down there.”

There has been growing concerns about the plight of thousands of migrant workers recruited by the Qatari regime to help the country complete huge construction projects in preparation for their hosting of the Work Cup in 2022. Scores of foreign laborers have been reportedly killed while working in insecure circumstances.