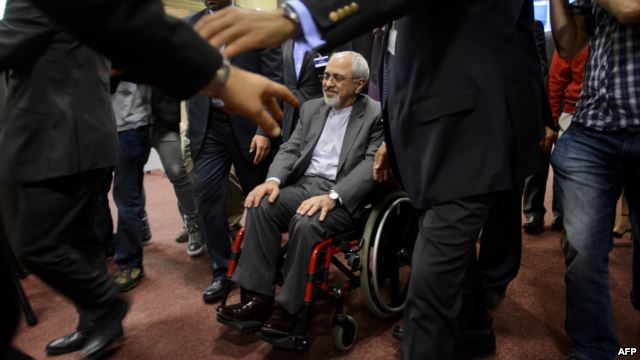 Representatives of the six world powers who attended this week’s nuclear talks in Geneva discussed Tehran’s sensitive nuclear work — and back pain.

That’s according to a senior U.S. official who briefed reporters in the Swiss city after the two-day talks.

The official was asked whether the discussion with Iranian Foreign Minister Javad Zarif, who led the Iranian delegation, included the back pain that reportedly caused him to arrive at the concluding press conference in a wheelchair.

Reporters present at the conference said that Zarif appeared to be in pain as he answered questions about the nuclear discussions. Iranian media also posted pictures of Zarif lying on a couch, covered in a blanket with a laptop on his chest, during his flight to Geneva.

Zarif’s back pain, which made headlines last week, apparently earned him some sympathy from Western nuclear negotiators.

“Everyone had a back story for him, books they thought he should read, things he might try, because we all have suffered,” the U.S. official said, according to the text of his briefing released by the State Department.

Zarif’s back also came up in the State Department’s daily briefing.

“How has the back pain of Iran’s Foreign Minister Zarif affected the nuclear discussions?” a reporter asked during an October 16 press conference.

“I don’t have any analysis on that for you,” said State Department spokeswoman Jen Psaki, who told the reporter to ask Iranians about the specifics and how the back pain may have affected the negotiations.

Zarif ‘s back pain and muscle spasms flared up on October 8. The 53-year-old minister wrote on Facebook that he had to check into a hospital due to severe back pain after an influential hard-line daily “misquoted” him.

The daily “Kayhan” reported that Zarif had said during a closed session of the parliament’s National Security Commission that a telephone call between U.S. President Barack Obama and Iranian President Hassan Rohani was a mistake. “Kayhan” also claimed that Zarif had said that his meeting in New York with American counterpart John Kerry had been too long.

“This morning, after seeing the headline of one newspaper, I got severe back and leg pain,” he wrote. “I couldn’t even walk or sit.”

Some said that by writing about his predicament on his popular Facebook page, which has 450,000 fans, the Iranian official was posing as a victim and fishing for sympathy.

The post indeed generated thousands of messages by Iranians wishing him well and offering suggestions for relieving back pain. Many condemned “Kayhan” for sending the minister to the hospital and accused the newspaper of spreading lies. Some advised Zarif to get used to attacks by the hard-line daily, which is known for going after critics and denouncing anyone it believes is against revolutionary values.

There were also a few who poked fun at Zarif, noting that his last name — which means “delicate” in Persian — fits his condition.

Mehrzad Boroujerdi, director of the Middle Eastern Studies program at Syracuse University, says Zarif has publicly discussed his physical problems in the past.

“In the book ‘Mr. Diplomat’ — which is a series of interviews with Zarif — he talks about having problems with his eyes, so he seems to be open when it comes to these issues,” Boroujerdi says. “I don’t think he’s doing it for [attention].”

Suzanne Maloney, an Iran expert at the Brookings Institution and a former State Department policy adviser, says Zarif’s attribution of his pain to a newspaper’s misquote was a kind of “political flourish that may play well in Iran but generates rolled eyes elsewhere.”

Given the complicated domestic politics in Iran, where hard-liners are opposed to some of the diplomatic overtures by Zarif and his boss, Rohani, and the potentially difficult nuclear negotiations ahead, the foreign minister could face even more pain.

Maloney questions whether Zarif is ready for the stress to come.

“One has to wonder, if a single jab from ‘Kayhan’ has put the foreign minister in a wheelchair, how is he going to respond when the political pressure at home — and around the negotiating table with the U.S. — intensifies, as it is surely bound to do?”