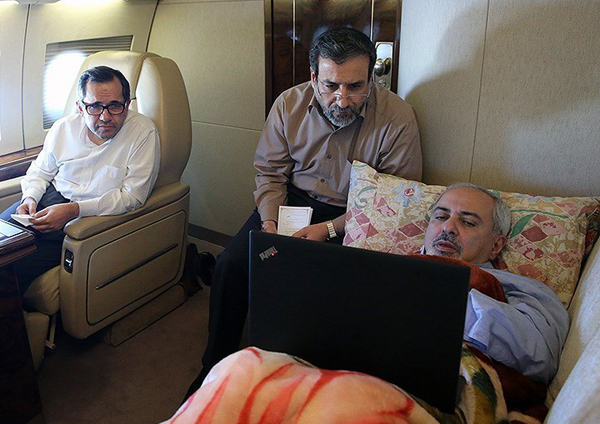 VIENNA (AP) — Beyond having to deal with six world powers making demands on his country’s nuclear program, Iranian Foreign Minister Mohammad Javad Zarif has another pressing problem: back pains so intense he’s had to use a wheelchair.

Zarif heads the Iranian delegation at key talks this week with the United States, Russia, China, Britain, France and Germany.

He apparently wasn’t keen on sharing his ailment with the public. Instead of leaving his posh Geneva hotel by the main exit hours after returning from the talks and complaining of back pains, he was wheeled out of the service entrance and into a waiting van Tuesday.

European Union spokesman Michael Mann said the pains did not stop Zarif from having a “cordial” dinner Monday evening with Catherine Ashton, the top EU diplomat convening the talks. But Zarif deputy Abbas Araqhchi said Zarif was “suffering a lot,” although he intended to stay in Geneva until the talks ended.

Zarif’s ailment became a political issue earlier this month when he fired back at hardline critics of Tehran’s groundbreaking outreach to the United States, accusing opponents of using fabricated news leaks to undermine the effort.

Zarif said the political battles had become so tense it had thrown his back into spasm. He said the source of his distress was an article in the hardline newspaper Kayahan daily, which Zarif claimed misquoted him as saying the recent telephone call between the Iranian president, Hassan Rouhani, and his US counterpart, Barack Obama, had been inappropriate.

The stress this alleged misrepresentation, said Zarif, drove him to seek medical attention.

“I got pain in the back and foot after seeing the newspaper’s headline this morning,” Zarif said then on his Facebook page.

Rouhani’s short-term priority is to negotiate an easing of western sanctions as part of negotiations over Iran’s nuclear program. Talks in Geneva adjourned Tuesday until Wednesday after Iran presented what it said was potentially a breakthrough proposal designed to diminish international fears that Tehran wants nuclear weapons.