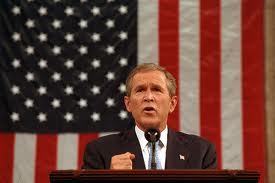 The four most exceptionally bad presidents

Columbus Day is a good day to consider American exceptionalism [3]. Columbus embraced the doctrine from the start,writing [4] about the Arawak Indians in Haiti: “Great multitudes of men came to the shore, all young and of fine shapes and very handsome…I could conquer the whole of them with fifty men and govern them as I pleased.”

Conquer [5] them he did, forcing them to find gold for the Spanish explorers, cutting off their hands if they failed.

In the 1600s the Puritans also deemed themselves exceptional, justifying their beliefs with a quote from the Psalms: “Ask of me, and I shall give thee, the heathen for thine inheritance, and the uttermost parts of the earth for thy possession.” In the Pequot War they annihilated [6] the Native Americans of southern New England.

Equality would be forthcoming, it seems, with the words of the Declaration of Independence: “We hold these truths to be self-evident, that all men are created equal.” But exceptions were made. George Washington’s [7] intentions [8] for the Iroquois Indians in 1779 were to “extirpate them from the country.” The Native Americans called Washington the “town destroyer.” Washington was just the first of many, many presidents who believed it was America’s role to tell others how to live.

What Makes a Good or Bad President?

The same names generally appear on all the “worst President” lists: James Buchanan, Warren G. Harding, Andrew Johnson, Franklin Pierce. US News [9] and Wikipedia[10], both of which use a consensus of experts, agree on these four, and both have Millard Fillmore, U.S. Grant, William Henry Harrison, and John Tyler in the 5th- though 8th-worst positions.

It seems reasonable to discredit an individual who is hateful toward another race or class of people. Based on this guideline, Civil Liberties [11] sheds some light on the expert choices. Buchanan, Fillmore, and Andrew Johnson all supported slavery, and all deserve to be near the bottom of any ‘worst’ list. But this doesn’t explain it all. Woodrow Wilson was a racist [5], and Andy Jackson an oppressor of Native Americans [12], but both are near the top of the expert consensus list.

According to Princeton political scientist Fred Greenstein [13], “If there is a common denominator in presidential assessments, it is a bias toward activism, unless the activism is viewed as misplaced, as in the instances of Lyndon Johnson and Vietnam and Nixon and Watergate.”

Activism. Even the two most highly rated [10] Presidents, Lincoln and FDR, are heralded in part for their activism in wars considered necessary and just. But expansionism and intervention are oppressive forms of activism. From that perspective, it’s easier to arrive at the four worst Presidents.

As a hero of the War of 1812 and an advocate for the common white man, it’s easy to understand how our seventh President (1829-1837) was so admired. But in Native Americans [14] he saw only ‘savages’ standing in the way of progress. For ten years Jackson arranged ‘treaties’ with Indians in the American southeast, setting up his own friends as land agents, traders, and surveyors while encouraging white squatters to take over the land. Eventually recognizing Florida as vital to “national security,” he initiated raids on Seminole villages, burning down homes and forcing out residents, all in the name of the “immutable laws of self-defense.”

Indian removal [15], according to Jackson, would help the Native Americans to “cast off their savage habits and become an interesting, civilized, and Christian community.” He hypocritically added, “Say to the chiefs and warriors that I am their friend…[their land] they shall possess as long as grass grows or water runs.”

A few Americans, including Henry Clay and Ralph Waldo Emerson, tried to defend the rights of the land’s original inhabitants. But a great many more believed it was their country’s right to take what it wanted. Even today textbooks rely on euphemisms like “Florida Purchase 1819” rather than acknowledge the military massacres of Seminole villagers. Best remembered is the Trail of Tears that led thousands of sick and starving Cherokees across the Mississippi in the middle of winter to unfamiliar and unproductive land far from their home. By 1838 President Van Buren was proclaiming, “It affords sincere pleasure to apprise the Congress of the entire removal of the Cherokee nation of Indians to their new homes.”

Our eleventh President (1845-1849) campaigned on an expansionist [16] platform. The media reflected his sentiments [17], with the Democratic Review promoting the Mexican-American War, arguing that it was “Our manifest destiny to overspread the continent allotted by Providence for the free development of our yearly multiplying millions.” The New York Herald said of Mexico, “We believe it is a part of our destiny to civilize that beautiful country.”

In his inauguration speech, Polk proclaimed, “Foreign powers do not seem to appreciate the true character of our Government. To enlarge [our Union’s] limits is to extend the dominions of peace over additional territories and increasing millions. The world has nothing to fear from military ambition in our Government.”

The battles seemed a preview of the bloodshed to come in the American Civil War, as “men from both armies screamed and groaned in agony from wounds…By the eerie light of torches ‘the surgeon’s saw was going the livelong night.” Yet unlike the Civil War, much of the violence in 1847 was directed toward the Mexican people. A U.S. colonel wrote, “I shall never forget the horrible fire of our mortars…going with dreadful certainty and bursting with sepulchral tones often in the centre of private dwellings.” Another American wrote, “Such a scene I never hope to see again. It gave me a lamentable view of human nature…and made me for the first time ashamed of my country.”

After the war, the U.S. paid Mexico $15 million for half of its country. Polk said, “Our beloved country presents a sublime moral spectacle to the world.”

This could be a four-way tie among McKinley, Teddy Roosevelt, William Taft, and Woodrow Wilson. Native Studies researcher Zoltan Grossman [18] lists the U.S. interventions in foreign countries since 1890. McKinley/Roosevelt/Taft/Wilson had 36 foreign interventions in 24 years.

On the domestic front, Roosevelt and Taft and Wilson ushered in the Progressive Era [19], which greatly improved the status of working people. But exceptionalism steered the foreign policies of all three men. In 1901 Woodrow Wilson wrote, “Our interest must march forward, altruists though we are; other nations must see to it that they stand off, and do not seek to stay us.” Roosevelt carried his big stick[20] through Central America. President Taft declared in 1912: “The whole (western) hemisphere will be ours in fact as, by virtue of our superiority of race, it already is ours morally.” McKinley, though, seemed to ‘accomplish’ [21] the most, picking up where Jackson and Polk left off, and doing it in just four-and-a-half years (1897-1901).

When the Cuban people were fighting for independence from Spain in 1898, McKinley initially did not want war. But he wanted control over the Caribbean and the Pacific. By the end of the 19th century, our growing nation was beginning to share Indiana Senator Beveridge’s assertion that “the Pacific is our ocean,” and the Washington Post was observing that “the taste of empire is in the mouth of the people even as the taste of blood in the jungle.” The mysterious sinking of the battleship Maine in Havana Harbor provided a reason to take action. In the end, the three-month encounter called a “splendid little war” by Secretary of State John Hay would open sugar and mineral and timber markets to the U.S., as companies like American Tobacco, Bethlehem Steel, and the infamous United Fruit took over millions of acres of land.

Cuba wasn’t the end of it. In December 1898 a treaty signed with Spain gave the U.S. possession of Puerto Rico and the Philippines, the latter envisioned as the passageway to the limitless markets of the far east. McKinley agonized over the proper course of action for the Philippines. He “walked the floor of the White House[22] night after night,” praying for the right course of action. He decided, finally, in his own words, that “they were unfit for self-government,” and that America’s role was to “civilize and Christianize them.”

Three years of brutal fighting followed. The mismatch of U.S. battleships against Filipinos lined up in trenches caused a British reporter to call it “massacre and murderous butchery.” Still, the people of the Philippines held on. General Arthur MacArthur, commander of the Philippines War, marveled at the “complete unity of action of the entire native population.”

McKinley also set a new precedent in foreign intervention by bypassing Congress to send 5,000 troops to China to defeat anti-imperialist rebels in the 1900 Boxer Rebellion [23]. Historians [24] consider this the origin of modern presidential war power against established governments.

This could again be a tie, including everyone from Truman through Obama, with over 75 foreign interventions [18] in 68 years. The “Truman Doctrine” helped to begin the Cold War. The ‘Carter Doctrine’ asserted that anyone else’s attempt to control the Persian Gulf would be “an assault on the vital interests of the United States,” and would be “repelled by any means necessary, including military force.” A 1992 Pentagon statement [25] declared “In the Middle East and Southwest Asia, our overall objective is to remain the predominant outside power in the region and preserve U.S. and Western access to the region’s oil.” And, ironically, from the same report: “It remains fundamentally important to prevent a hegemon or alignment of powers from dominating the region.”

But George Bush (2001-2009) stands out for his administration’s treatment of a largely innocent nation of people in the Middle East. The Downing Street Memo[26] and CIA intelligence [27] both make it clear that Bush had penciled in the Iraqi War before all the facts were available.

The western media portrayed the war as clean and precise, with the proud images of fighter jets skillfully vaporizing the military components of an enemy world. Actual statistics for the second Iraq War showed [28] that 18,898 targets were hit from the air, but less than 10% were directly related to the Iraqi military or government. According to Iraq Body Count [29]and a UN survey [30], US-led forces, insurgents and criminal gangs killed nearly 25,000 civilians in just the first two years of the war. A Johns Hopkins study [31] put the tally much higher, with an estimate of 650,000 Iraqi deaths.

For the first time in history, radioactive [32] battlefields were created in the Iraq Wars. The pictures of children born in theDU areas [33] are hard to look at. Babies with no arms, oversized heads, no brains, grossly deformed faces, organs outside their bodies.

And George Bush said, “The war in Iraq is really about peace.”

We Need a Truly Exceptional Leader

In the “expert consensus” polling [10], Teddy Roosevelt came in 5th, Woodrow Wilson 6th, Andrew Jackson 8th, James Polk 10th, and McKinley and Taft both near the middle. Like Reagan/Bush/Clinton/Bush/

Obama, they will be remembered as great believers in American exceptionalism. But we need a President who will treat all races and classes as equals. That would be exceptional.