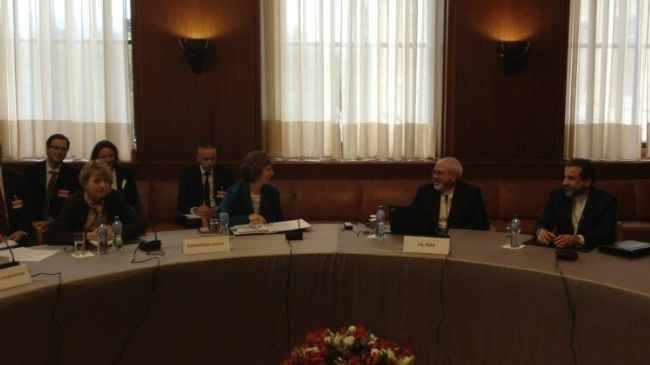 Iran and the five permanent members of the UN Security Council plus Germany are set to start a new round of talks on Tehran’s nuclear energy program in Geneva.

Iran and the five permanent members of the UN Security Council – Russia, China, Britain, France and the United States – plus Germany agreed on September 26 in New York to hold another round of talks in Switzerland.

Iranian Foreign Minister Mohammad Javad Zarif, who is leading a high-ranking Iranian delegation of political, technical and legal experts during the trip, told reporters upon arrival in Geneva on Monday, “The New York talks [in September] were an announcement of the two sides’ political will to resolve the nuclear issue and we think that the delegations of both sides were ready to reach a quick solution through negotiations at the foreign ministerial level.”

“We believe that the nuclear issue can be resolved in one year and Iran’s nuclear issue can turn into an ordinary matter in the International Atomic Energy Agency (IAEA) provided that the opposite side has goodwill,” Zarif stated.

On October 13, Iranian Deputy Foreign Minister for Legal and International Affairs Abbas Araqchi said Iran’s package to be proposed during the talks is based on “the same step-by-step approach which was brought up and generally agreed on” in meetings with the six powers partaking in the nuclear talks.

The deputy foreign minister added that Iran’s “logical, balanced and realistic” plan makes it possible for both sides to take the first step toward breaking the deadlock over Tehran’s nuclear energy program.

The United States, the Israeli regime and some of their allies have repeatedly accused Iran of pursuing non-civilian objectives in its nuclear energy program, with the US and the European Union using the claim as an excuse to impose illegal sanctions against Tehran.

Iran categorically rejects the allegation, arguing that as a signatory to the Non-Proliferation Treaty (NPT) and a member of the IAEA, it has the right to use nuclear technology for peaceful purposes.