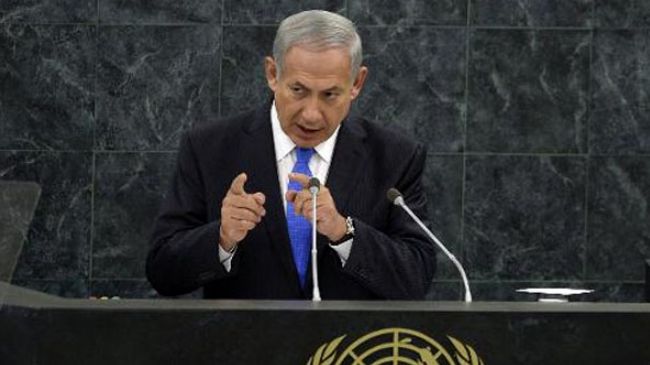 As Iran and the six world powers prepare to hold a fresh round of nuclear talks, Israeli Prime Minister Benjamin Netanyahu has urged French and British leaders not to ease sanctions on Tehran.

In telephone conversations with British Prime Minister David Cameron and French President Francois Hollande, Netanyahu said that sanctions imposed on Iran over its nuclear energy program were close to achieving their goal.

“Until Iran dismantles its military nuclear program, sanctions must not be eased….,” the Israeli premier added.

Netanyahu’s baseless accusation against Iran comes a few days ahead of the scheduled talks between Iran and the five permanent members of the UN Security Council — Russia, China, France, Britain, and the US — plus Germany in Geneva on October 15-16 over Tehran’s peaceful nuclear activities.

During his October 1 speech at the 68th annual session of the UN General Assembly in New York, Netanyahu called for the escalation of international pressures against Iran and threatened unilateral military action against the country.

He repeated his baseless accusation that Tehran is seeking to develop nuclear weapons, saying, “If Israel is forced to stand alone, Israel will stand alone.”

The Israeli regime, which rejects all international nuclear agreements, particularly the Non-Proliferation Treaty (NPT), maintains a policy of deliberate ambiguity over its nuclear activities and refuses to allow its nuclear facilities to come under international regulatory inspections.

The United States, Israel, and some of their allies accuse Iran of pursuing non-civilian objectives in its nuclear energy program.

Iran rejects the allegation, arguing that as a signatory to the NPT and a member of the International Atomic Energy Agency (IAEA), it has the right to use nuclear technology for peaceful purposes.

Tehran has also promised a crushing response to any act of aggression against the country.