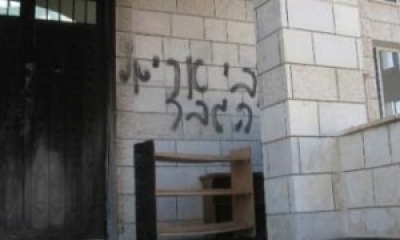 SHAFAQNA (Shia International News Association) – The Zionist settlers attacked a Mosque in Ramallah and drew the Star of David on its walls.

According to Shabestan, Qassan Daqlas the Head of housing in the West Bank said some Zionist settlers attacked a Mosque in the village of Borqeh in the North East of Ramallah and drew racist graffiti and the Star of David on the walls. He added that 2 Palestinian cars have also been set on fire. The villagers are constantly under attack from the Zionist settlers and according to reports so far have been attacked more than 589 times.