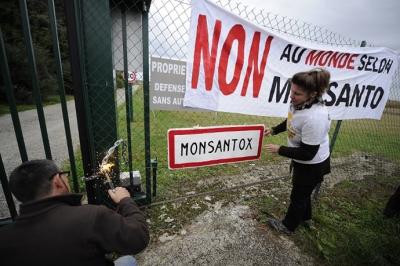 Thousands took to streets across the world’s cities

SHAFAQNA (International Shia News Association)– Thousands took to streets across the world’s cities on Saturday to protest the use of GMO products, with Giant Monsanto being the main target. Over 50 countries have been taking part in the march for world food day, and across 47 different US states.

Berlin, Strasbourg, Chicago, London, Sydney and Mumbai are just a few of the 500 cities worldwide involved in the rallies, with each one drawing hundreds.

The demonstrators have been calling for the permanent boycott of Genetically Modified Organisms (GMOs) and “other harmful agro-chemicals,” according to March Against Monsanto’s official webpage. Protesters wielded large banners denouncing GMO products, and donned fancy dress: In Washington DC a group dressed as bees to highlight the impact of insecticides on bee populations.

Dietrich Wittel, vice president of the True Food Foundation cited experiments conducted on rats, bringing a large poster with him showing the tumors suffered by the animals subject to being fed Monsanto corn.

“There are subtle signs of organ damage even in 90 days. But in two years, the lifetime of a rat is shortened – they have massive organ damage, massive breast tumors in the female rats, and that is really, really frightening,” he said, going on to discuss the effects on larger animals.

“Recently, a study from Australia has shown that pigs that are fed these corn products get massive stomach ulcers…. we have a much longer lifespan that a rat. If we are waiting for cancer to show as a result of GMOs, we’ve got to wait,” he said.